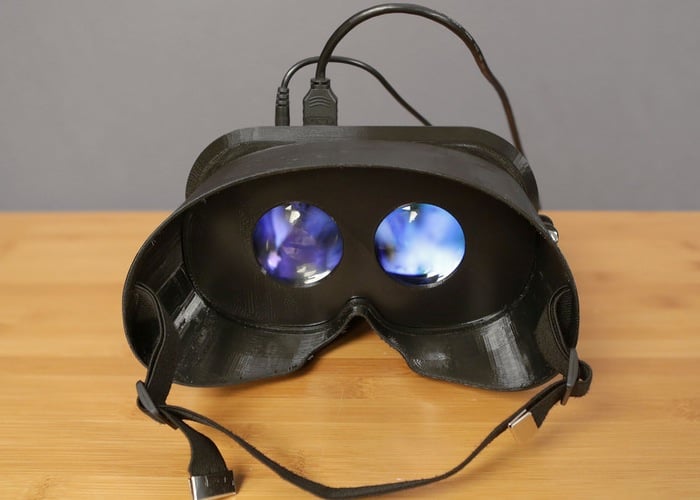 If you have a 3D printer and fancy creating your very own Oculus Rift style 3D printed virtual reality headset you might be interested in a new tutorial which has been created by the team at Adafruit.

The design of the DIY virtual reality headset is similar to that of the VR2GO mobile viewer and is made up of a number of components including a 5.6″ Display, 9-DOF IMU Breakout board and a Arduino Micro board. Check out the video after the jump to learn more.

If you prefer you can use the system to create an immersive display for watching movies or playing games however adding a pair of 50mm 5x Aspheric Lenses to the system will enable you to create a DIY version of the Oculus Rift.

When compared to the R2GO mobile viewer this new virtual reality headset uses a 5.6 inch display and the aspheric lenses rather than a smartphone with everything then held together in the 3D printer enclosure. Hack A Day explains:

“At the end of the tutorial, the instructions state that once everything is assembled, all that is required afterwards is to plug in a 9V power adapter and an HDMI cable sourcing video from somewhere else. This should get the console up and running; but it would be interesting to see if this design in the future can eliminate the wires and make this into a portable unit.

Regardless of which, this project does a fantastic job at showing what it takes to create a homemade virtual reality device. And as you can see from the product list after the break, the price of the project fits under the $350 DK2 amount, helping to save some money while still providing a fun and educational experience.”

For more information on the new DIY virtual reality headset jump over to the Adafruit website for details.