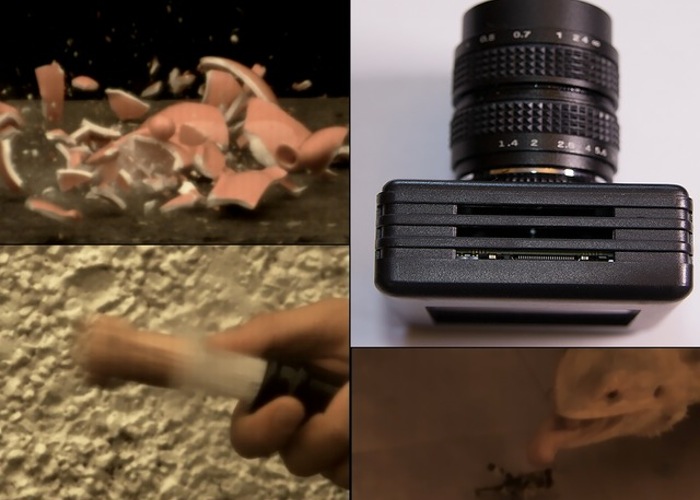 Photographers that are looking for a low-cost highly frame rate camera might be interested in the new fps1000 camera which has been created by Graham Rowan based in the UK and is capable of capturing images at 840 to over 10,000 frames per second.

The fps1000 high frame rate camera is fitted with a standard C mount fitting which makes it suitable for almost any lens on the market, there are also a range of low-cost C mount adapters available if required.

Watch the video below to learn more about the fps1000 camera project and see it in action. Rowan the cameras creator explains a little more.

“The fps1000 is a high speed camera. It records video at a much higher speed than normal video cameras which allows it to capture motion than would normally appear as a blur. When played back at normal video speeds the images seem to move in slow motion with all the fine detailed movement that is normally missed. So high speed cameras are also ironically called slow motion cameras.

The fps1000 is essentially a single board fully integrated camera which can easily be adopted into your own custom application. You have full access to the on-board STMicro ARM processor which can be programmed and debugged via a Serial Wire Debug (SWD) port on the board. All the driver software to access the on-board peripherals including the LCD display, touch screen, USB and micro SD card sockets and the high speed video grab controller. The high speed frame grabbing is all done in hardware so the CPU is free to run your software.

Three versions of the fps1000 are available: SILVER, GOLD and PLATINUM, differing in the amount of recording memory, maximum resolution and maximum frame rate. In all other respects the cameras are identical in terms of size and included hardware and software. The feature list of the different versions is shown on the comparison chart below:” 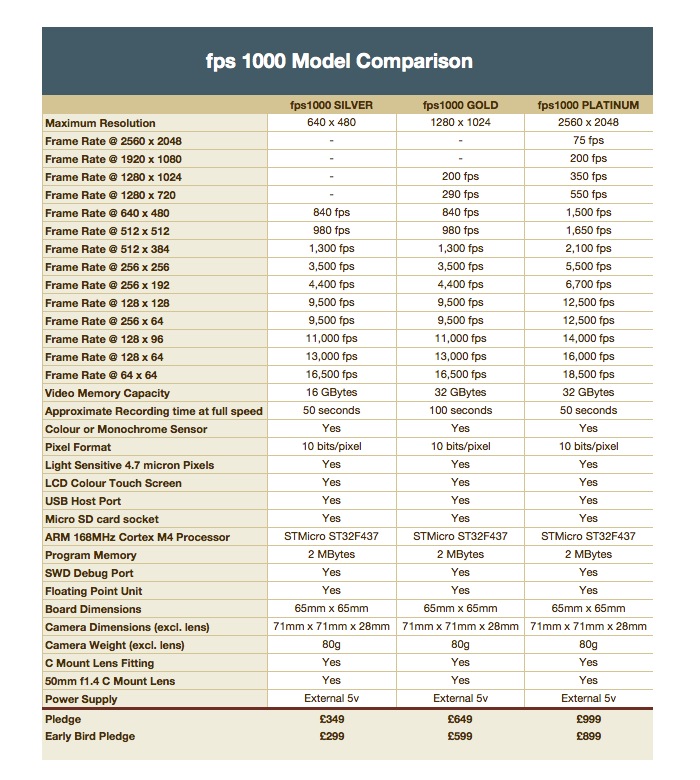 The fps1000 camera project is currently over on the Kickstarter crowd funding website looking to raise £20,000 in pledges, and has already passed this with still 29 days remaining on its campaign.

So if you think fps1000 camera is something your slow-mo photography could benefit from, visit the Kickstarter website now to make a pledge and help the fps1000 camera become a reality.