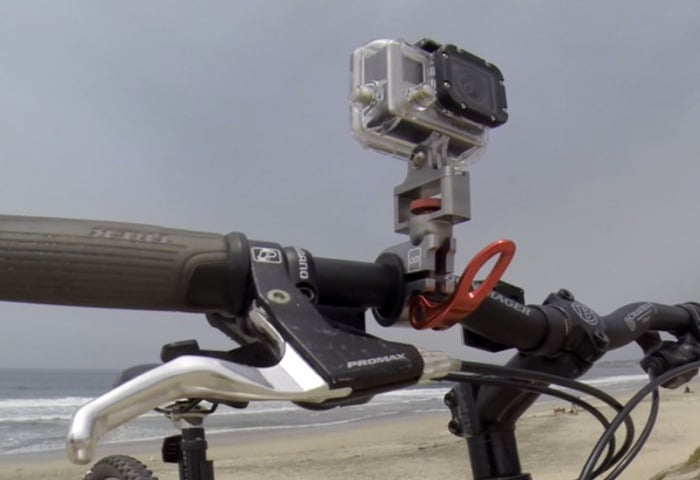 Cyclists, canoeists and adventurers that also use a GoPro action camera to record their exploits, might be interested in the new mounting system called Talon that has been specifically designed for bikes, which provides both a secure fitting with the versatility to attach it almost anywhere.

Talon has been created by Yohei Yamamuro and is aluminium GoPro mount which can be used on bikes, canoes and other frame-based vehicles. Check out the video after the jump to learn more about this new GoPro action camera mounting system.

The Talon project is currently over on the Kickstarter crowd funding website looking to raise $20,000 in pledges to make the jump from concept to production. Talon is equipped with a
patent-pending mechanism enables 4 degrees of freedom, which means the mounting object can be at irregular angles, and misaligned to the filming direction. Its creators explain :

“Plastic mounts may flex and shift during action filming, thereby affecting the recorded video quality. Occasionally, they will break potentially damaging your camera.  Metal mounts are rigid, but often require tools to install and adjust. Especially during single camera use, this can lead to one-dimensional videos.

And, some mounts require the object the camera mounts to, be horizontally or vertically aligned to the desired filming direction.  Talon, is made from high quality aircraft grade anodized aluminum, and its accompanying hardware is stainless steel. Therefore, the mount is rigid, and will not rust in typical corrosive environments.  Talon is unique due to its patent-pending mechanism; unlocking the quick-release handle allows easy attachment and adjustment, without tools, which allows multiple views from one camera.

In addition, the patent-pending mechanism enables 4 degrees of freedom, which means the mounting object can be at irregular angles, and misaligned to the filming direction.”

So if you think Talon is something you could benefit from, visit the Kickstarter website now to make a pledge and help Talon become a reality.