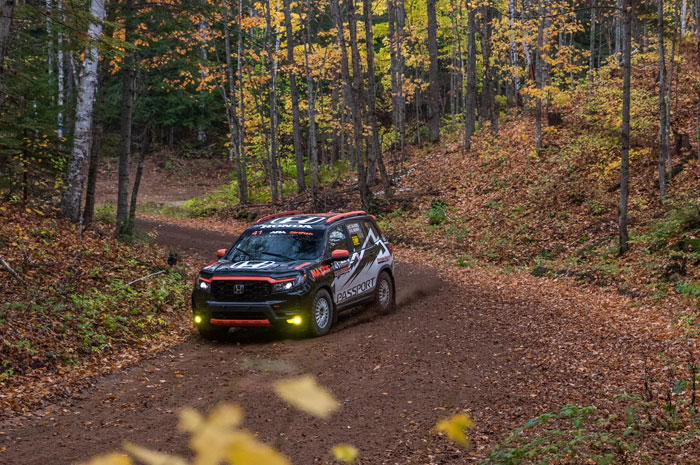 Honda has announced a team of engineers is taking the new Passport SUV into the rally racing realm. Honda is showing off the 2022 Passport stage rally truck built specifically for racing by the Honda Performance Development Maxxis Rally racing team. The racing debut for the vehicle was at the Lake Superior Performance Rally in Michigan on October 15 and 16th.

Honda is competing in the Limited 4WD class with its vehicle. The class sees modified Street vehicles race at over 100 mph on natural-terrain closed courses. Racing surfaces include gravel, dirt, mud, and snow. The event has courses that span hundreds of miles.

The Passport rally truck uses BRAID Winrace T rally wheels with Maxxis RAZR M/T or A/T tires. The racing truck also has a custom fabricated one-eight-inch oil pan and rear differential skid plates to help protect the underbody. The truck also has high-density polyethylene panels to proptect the fuel tank and other components. Power comes from the production 3.5-liter V-6 engine, nine-speed automatic transmission, and all-wheel-drive system. No modifications were made to the drivetrain or suspension.