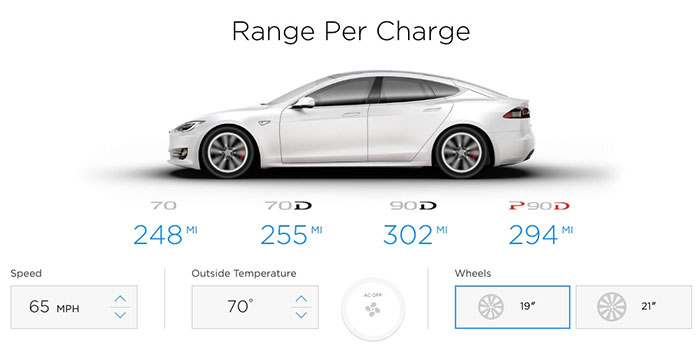 Tesla has finally done it. It has built a version of the Model S 90D AWD electric car that has received an official EPA rating of over 300 miles of driving per charge. The 2016 90D AWD received EPA ratings for 294 miles of driving combined, 285.7 miles in the city and 303.2 miles on the highway. The version of the Tesla 90D uses a 90 kWh battery pack and a 193 motor front and rear.

The 90kWh battery pack was around in 2015 for the Model S, but since it was an upgrade to the 85 kWh battery pack in the previous car the EPA didn’t retest for a new range. That older 90D was given an EPA rating of 288 miles per charge on the highway. Tesla is a bit more conservative calling out a 294-mile range.

However, the Model S page on the Tesla website does show that in ideal conditions with 19-inch wheels, constant speed of 65 mph, and a 70F temperature outside the car would be good for 302 miles per charge. Rumors have been making the rounds that Tesla was eying a P100D version of the Model S that might push range nearer to 400 miles per charge.