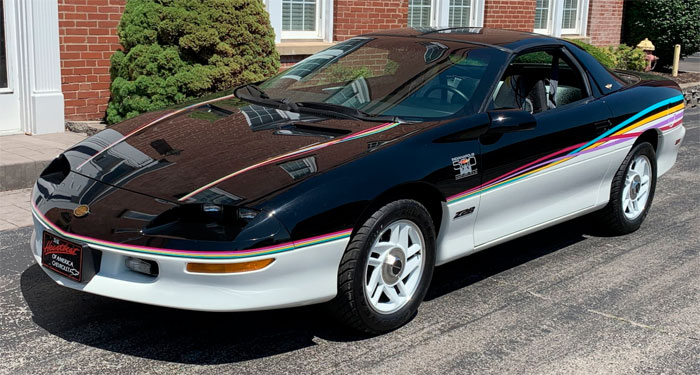 Back in 1993, Chevrolet made a special edition of its Camaro called the Camaro Pace Car Edition. Chevy built only 645 of the vehicles, and this particular unit will auction with Mecum at no reserve. The car has 70 miles on it and has been part of a collection since new and was never sold at retail.

The car has t-tops, and the original pace car decals were never installed. The car has a 5.7-liter engine that makes 275 horsepower and an automatic transmission. The car has power steering and brakes, air conditioning, tilt steering column, power windows, power locks, and power mirrors.

It rolls on white alloy wheels and has an extremely unique interior befitting of the early 90s. The interior is done in cloth and has the same white and black with colored stripes motif seen on the outside of the vehicle. There is no indication what the car might go for, but Camaro’s of this generation don’t typically command high prices.