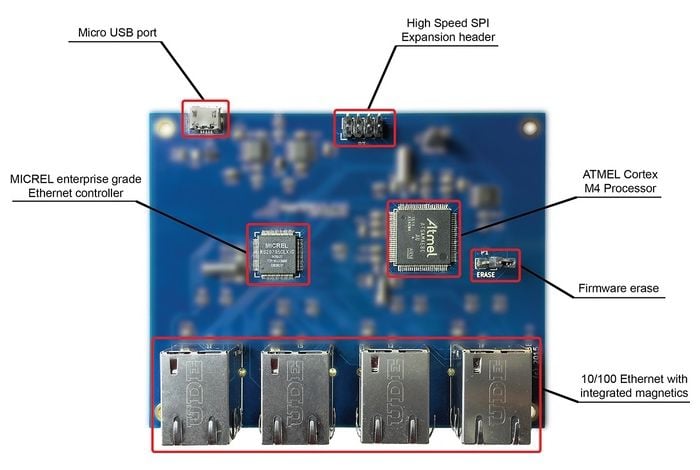 Northbound Networks has created the world’s smallest OpenFlow SDN switch which has been designed to be powerful enough to develop “world changing SDN applications”, but smaller to sit on your desktop.

The Zodiac FX as the new OpenFlow SDN switch has been called is equipped with an Amtel ATSAM4E Cortex M4 processor, 4 x 10/100 Fast Ethernet ports with integrated magnetics, together with a command line interface.

The Zodiac FX command line interface is accessible via a USB virtual serial port, and more can be learnt about it features and design in the video below.

Imagine the possibility of having complete control over your home network. Like giving priority to bandwidth sensitive applications such as streaming media or online gaming. What about monitoring network usage or providing guest access to friends and family or even using it to protect your network from intruders?

Until now the power of Software Defined Networking (SDN) was only available to the administrators of large corporate networks like Google and Facebook. Even though there are numerous free or open source SDN controllers on the internet the one thing that was missing was a small, affordable OpenFlow switch.

Other features of the Zodiac FX include :

Jump over to the Kickstarter website for more information and to make a pledge from $64 via the link below.