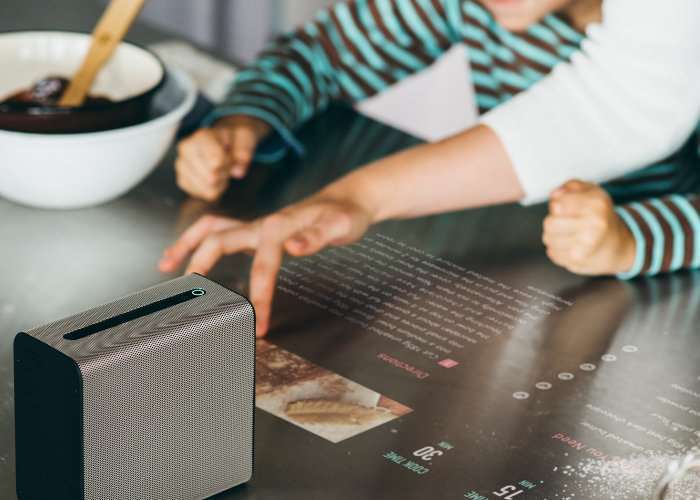 After launching in the UK during September 2017, Sony has today announced that the Xperia Touch Projector which projects an interactive display onto almost any flat surface, is now available in the US priced at $1,700.

The experimental Xperia Touch Projector was first unveiled during the Mobile World Congress 2017 during February And is now available in select T-Mobile stores in Chicago, Los Angeles, and Miami, as well as in the Sony Square display room in New York City, as well as from the likes of Amazon and other online retailers.

Feature of the Xperia Touch Projector include:

Turn any flat surface into an interactive and collaborative touchscreen with the all-new Xperia Touch, a compact short-throw laser projector that will transform how you communicate, share information, and enjoy entertainment. This small, lightweight, and portable device displays large images (23” to 80”) on walls, tables, floors, and other flat surfaces. Use touch and voice control to interact and collaborate creatively with others while watching movies, playing games, or leaving notes projected onto any flat surface.

With its innovative sensors, 13MP camera, and quality stereo speakers, Xperia Touch brings people together to interact and share in the office and at home in fun, creative ways – whether that’s tackling a project with colleagues, following cooking recipes off the kitchen counter with the kids, or video calling via the big screen to the grandparents.

Powered by Android and optimized by Xperia for the large screen, the Xperia Touch is easy to use with a familiar and customizable interface that provides access to a series of interactive apps and services. The built-in battery allows Xperia Touch to be used on the move for up to an hour without having to be plugged in. Transform any surface into an information-sharing, communication, and entertainment experience with Xperia Touch.