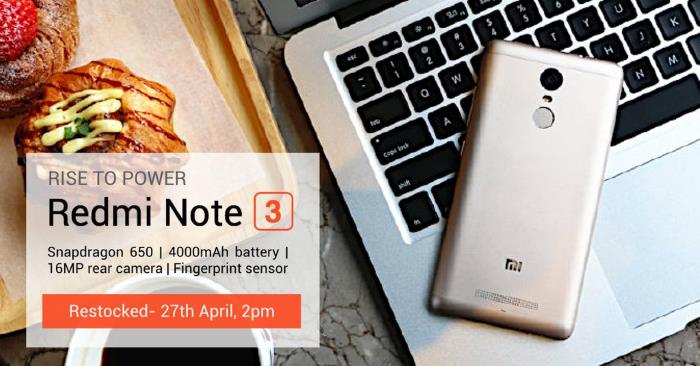 Xiaomi Redmi Note 3 launched in India last month. The device was only available in the country through flash sales. If you’re interested in the handset, there’s some good news for you.

The company announced on Twitter that Redmi Note 3 will be back in stock and will go on open sale on April 27th, starting at 2pm.

The handset comes with a 5.5-inch display boasting a resolution of 1920 by 1080 pixels, and is powered by a Qualcomm Snapdragon 650 processor. The Xiaomi Redmi Note 3 comes in two versions: one featuring 2GB of RAM and 16GB of storage, while the second features 3GB of RAM and 32GB of internal storage. There’s also a microSD card slot for users looking for expandable storage.

Other features includes 16MP main camera for photos and videos, 5MP front-facing camera, a massive 4,000 mAh battery, fingerprint sensor and ships with Android 5.1.1 Lollipop with MIUI on top of it.

Anyone interested in picking up the Xiaomi Redmi Note 3 next week? Sound off in the comments below.