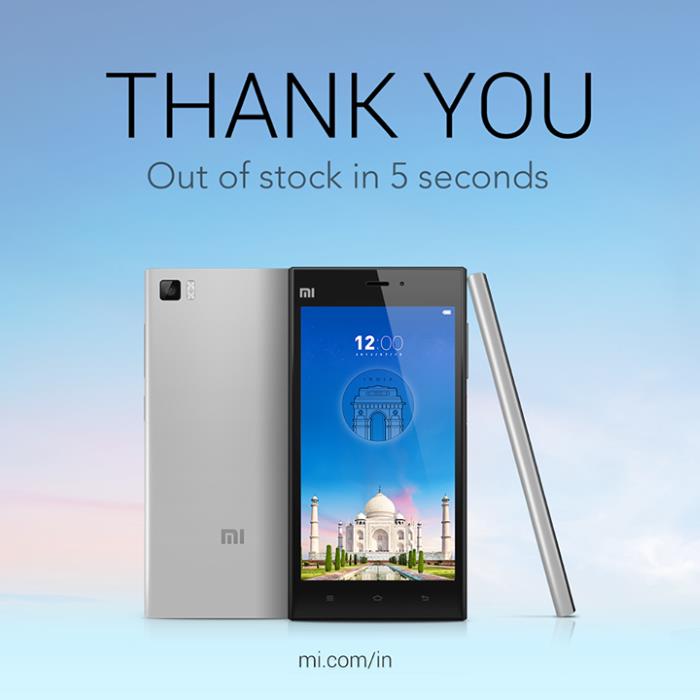 Not too long ago, the Xiaomi Mi3 was announced in India with an extremely affordable price tag. The handset was being sold at FlipKart, India’s top retailer.

According to the company, Xiaomi Mi3 was sold out in India less almost five seconds. The company didn’t reveal the number of units sold, but it shouldn’t be too big.

The company usually asks customers to register for the handset, before it goes up for sale. Starting 2pm on August 5th, the company will start selling the Xiaomi Mi3 once  again, with the registrations kicking off today and will last until August 4th.

The handset offers top-of-the-line specifications at a very pocket-friendly price. It comes with a 5-inch display sporting a resolution of 1920 x 1080 pixels, and comes with a quad-core Snapdragon 800 SoC on board. There’s 2GB of RAM and 16GB storage, a 13MP camera for photos and videos, as well as a 2MP front-facing camera, a 3,050 mAh battery and runs Android 4.4.2 KitKat with Xiaomi’s own UI.

The company has received its fair share of success in China, and is also called the “Apple of China.” It’s not just the Mi3, the company launched its latest flagship device, the Xiaomi MI4, recently in China which comes with even better specifications.