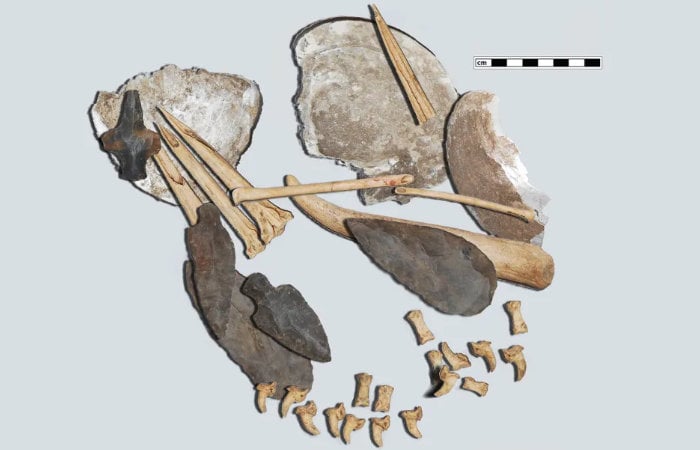 Researchers have uncovered what is believed to be the world’s oldest tattoo kit providing insight into ancient Native American inking traditions. The tattoo kit was unearthed at Fernvale site in Williamson County, Tennessee and was wrapped in the skin of a canid and consists of sharpened turkey bones and mussel shells with traces of red pigment and is thought to be buried at least 3,600 years ago in a Late Archaic cemetery in Tennessee. In 2007, they remained in storage, and Aaron Deter-Wolf, an archaeologist with the Tennessee Division of Archaeology, and Tanya Peres, a zooarchaeologist at Florida State University, revisited and analyzed them.

“The bundle was originally unearthed in 1985 but was only recently examined as a record of tattooing processes. The excavation site, known as Fernvale, was a Native American settlement found during a bridge replacement project in Williamson County. At the time, the Tennessee Division of Archaeology recovered the artifacts, then boxed them up and placed them in a permanent curatorial facility, where they remained in the dark for two decades.”

“When the pair examined the sharp turkey bones and bivalve shells, they wondered if the artifacts could be implements in a tattoo bundle — a specific type of sacred bundle used in indigenous rituals. The sharp bones recalled needles, while pigment residue on the shells suggested that they were used as ancient inkpots. Other turkey bones that were stained appeared to be tools for mixing pigment. The whole assortment had been placed in the grave beside its occupant, suggesting that it held significant value for that individual.”

““These bundles were incredible important, only held and used by certain bundle keepers who were also tattooists,” Deter-Wolf told Hyperallergic. “There were oral histories, songs, and dances that went along with the tattooing process.””