Microsoft is currently working the latest Windows Phone 8 update known as the General Distribution Release 3 (GDR3) that will bring support for high-resolution displays and quad-core processors. The update is also expected to bring a number of improvements to older devices as well.

Recently, a user from Windows Phone Central forum has posted a number of screenshots of the latest Windows Phone 8 GDR3 update running on Lumia 920 that he picked up on Craiglist from a anonymous developer. The update is being tested by Microsoft and is expected to launch with Nokia Lumia 1520 and HTC Harmony, as reported by The Verge. 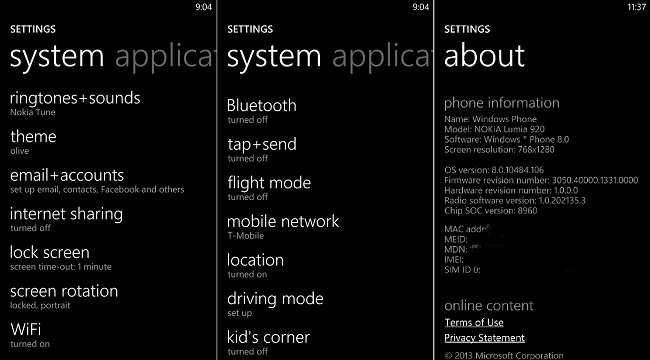 The update includes a number of improvements such as orientation lock, which when turned on will change the orientation if the device is rotated. Another interesting feature a Driving Mode that allows you to automatically mute calls and texts while driving. Windows Phone 8 GDR3 update also includes ability to close apps in multitasking view, Custom sounds for text, voice mail, e-mail, and reminders. The most useful feature is the ability to restore your phone over WiFi after your reset Windows Phone 8 device. The user has posted a number of screenshots of many features which are available at the source link.