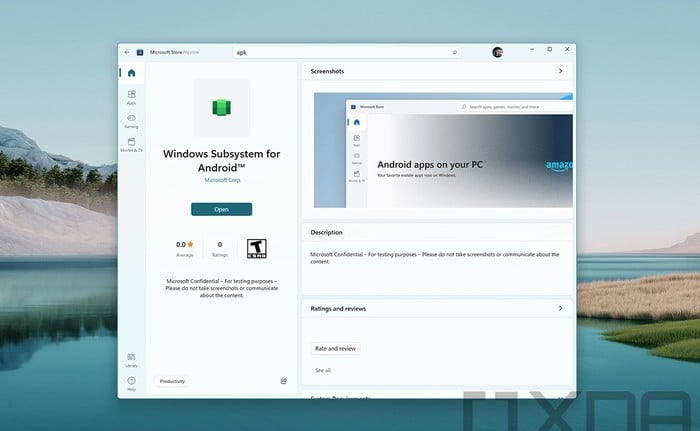 Last month Microsoft announced an official Windows 11 release date confirming that the new operating system will be available from October 5th 2021 with free updates being made available to supported Windows 10 computers. Unfortunately when the next generation Windows OS launches the highly anticipated Android application support will not be available at launch but is expected to be rolled out very shortly afterwards.

Now it is being suggested that the Android applications supported by Windows may also be made available to Xbox users. Microsoft has announced that it is planning to roll out a preview of the Windows Subsystem with Android support to members of the Windows Insider program in the next couple of months although no date has been penciled in as yet.

This week a Windows Subsystem for Android app has arrived in the Microsoft Store, implying that preview builds are nearing the end of their development and may be available as preview builds very soon. Unfortunately at the current time installing the application doesn’t actually accomplish anything and it seems to be more of a placeholder rather than an official application. The Microsoft listing does provide a few indications and what sort of system you will need to be able to run Android applications on Windows suggesting.

Android applications running on the Xbox

Xbox owners may be able to enjoy a number of features including the ability to play Android games on their Xbox consoles if desired. Brad Linder explains a little more about what might be possible with het new Android support on Xbox.

– You may be able to play Android games on Xbox consoles. While these don’t tend to have console-quality graphics, they’re hugely popular on mobile devices, and there may be some folks who’d like to be able to easily play the same titles on their TV as they do on their phone and tablet.
– It could open the door to using third-party game streaming applications like Steam Remote Play Together on an Xbox device (in addition to Xbox cloud gaming, which is available with an Xbox Game Pass Ultimate subscription).
– Android app support on an Xbox could let you use game console as a pseudo-desktop computer thanks to support for Android versions of applications like Microsoft Office and Adobe Photoshop, even if they’re a bit stripped down compared with their desktop counterparts.

For more information on the Xbox Android application support that will be rolling out with the Windows 11 operating system jump over to the XDA Developers Forum by following the link below.