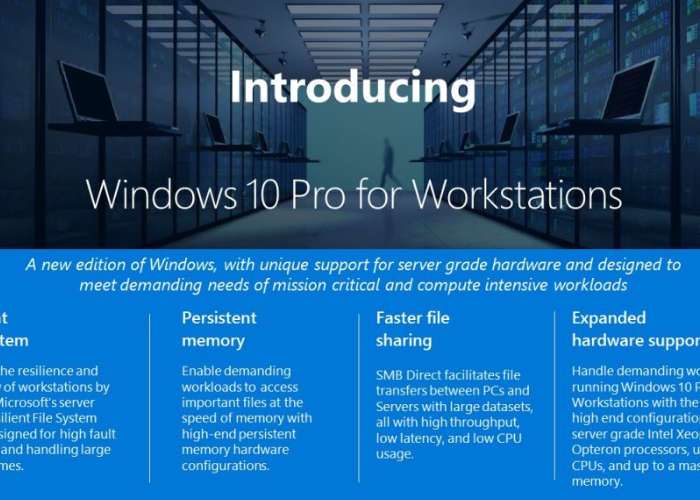 Microsoft has today announced in a few months time it will be launching a new version of its latest operating system Windows 10 Pro for Workstations, which will offer users unique support for server grade PC hardware.

The new operating system version is designed to meet “demanding needs of mission critical and compute intensive workloads”, says Microsoft. The new Windows 10 version will be rolled out later this year as part of the Fall Creators Update.

Major features of the latest version of Windows 10 include :

• ReFS (Resilient file system): ReFS provides cloud-grade resiliency for data on fault-tolerant storage spaces and manages very large volumes with ease. ReFS is designed to be resilient to data corruption, optimized for handling large data volumes, auto-correcting and more. It protects your data with integrity streams on your mirrored storage spaces. Using its integrity streams, ReFS detects when data becomes corrupt on one of the mirrored drives and uses a healthy copy of your data on the other drive to correct and protect your precious data.

• Persistent memory: Windows 10 Pro for Workstations provides the most demanding apps and data with the performance they require with non-volatile memory modules (NVDIMM-N) hardware. NVDIMM-N enables you to read and write your files with the fastest speed possible, the speed of the computer’s main memory. Because NVDIMM-N is non-volatile memory, your files will still be there, even when you switch your workstation off.

• Faster file sharing: Windows 10 Pro for Workstations includes a feature called SMB Direct, which supports the use of network adapters that have Remote Direct Memory Access (RDMA) capability. Network adapters that have RDMA can function at full speed with very low latency, while using very little CPU. For applications that access large datasets on remote SMB file shares, this feature enables:
◦ Increased throughput: Leverages the full throughput of high speed networks where the network adapters coordinate the transfer of large amounts of data at line speed.
◦ Low latency: Provides extremely fast responses to network requests, and, as a result, makes remote file storage feel as if it is directly attached storage.
◦ Low CPU utilization: Uses fewer CPU cycles when transferring data over the network, which leaves more power available to other applications running on the system.

• Expanded hardware support: One of the top pain points expressed by our Windows Insiders was the limits on taking advantage of the raw power of their machine. Hence, we are expanding hardware support in Windows 10 Pro for Workstations. Users will now be able to run Windows 10 Pro for Workstations on devices with high performance configurations including server grade Intel Xeon or AMD Opteron processors, with up to 4 CPUs (today limited to 2 CPUs) and add massive memory up to 6TB (today limited to 2TB).