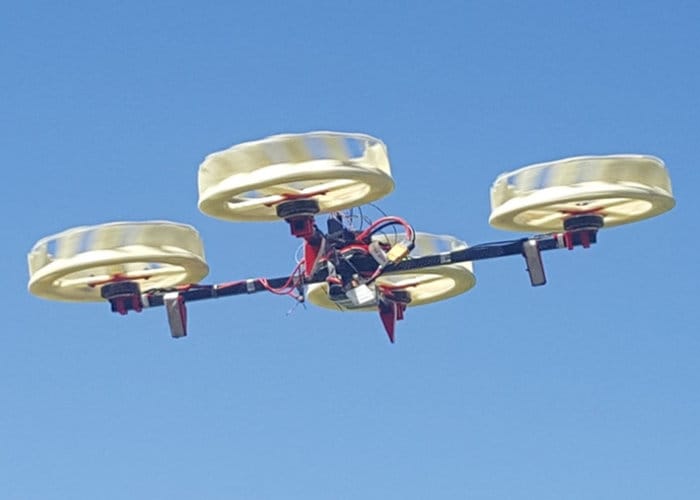 Drone pilots searching for a new way to explore and fly in silence may be interested in a new design for low noise rotors created by Annular Innovation. Check out the demonstration video below during which the Whisper Drone is flown equipped with the low noise rotors rather than more traditional propellers.

“Hello Kickstarter community. My name is Derek Schwartz, founder of Annular Innovation, and I believe I have built a small remote-controlled prototype of what qualifies as a new kind of aircraft. What makes this aircraft special is the rotor it utilizes to produce the lift force necessary for flight. Instead of a propeller, it uses a ring-like rotor with tall vanes extending from the surface. The result is a craft which I think is counter-intuitive in that it doesn’t seem like it should fly, but it does. For this project, I would like to build a better version, and then send it out to backers as a reward tier.”

“ ‘Neat’ you say, ‘but we have helicopters and airplanes already, why should I care about your little toy?’ Well, in the first place, it looks strange, and seeing strange things fly can inspire curiosity. In the second, it produces less noise, and the noise it does produce is easier on the ears. Instead of the typical hive-like sound of drones, it produces the whoosh of air passing through a vent. The hope being that when it’s scaled up in size, this approach could be used to create large, quiet craft. Heavy-lift delivery drones could be made without generating helicopter-like noise, air taxis might be constructed without producing objections from nearby communities, and the buzzing noise pollution caused by airplane propellers could be suppressed.”

For more information and to help this project come to life jump over to the official Kickstarter crowdfunding campaign page by following the link below.