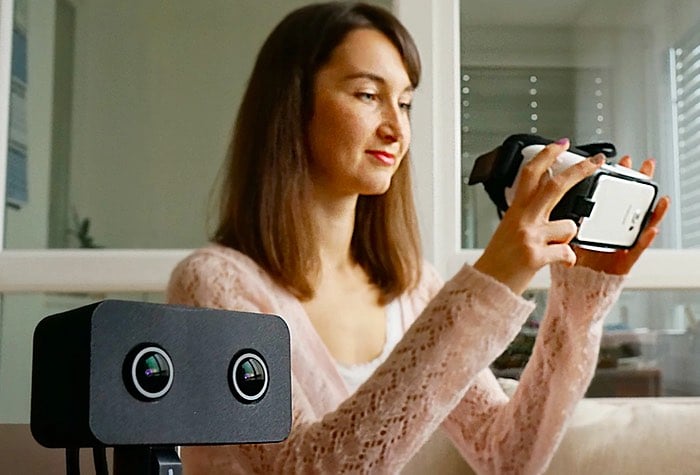 Anyone looking for a more immersive feeling when engaging in web conferences, may be interested in giving the new WebEye VR virtual reality web cam system more investigation.

Designed to provide a more immersive feeling and allow users to feel the presence instead of just watching a screen, the innovative and unique WebEye VR is marketing itself as the world’s very first virtual reality web camera.

Watch the video below to learn more about the inspiration and functionality of this unique piece of interactive hardware which has been designed to be used with the ever-growing range of virtual reality hardware which will be exploding onto the consumer market during this year.

Its developers explain more about the technology and how the VR web camera can add immersion to your communications.

WebEye VR is about to revolutionize how we entertain and communicate with others online. Featuring full stereoscopy with 160° viewing in Full HD at 30 FPS (Frames Per Second), WebEye VR allows you to look up, down, left or right and view everything in 3D with full depth perception by pulling people and objects into your metaverse so you can interact with them. Our VR webcam delivers cutting edge technology that is easy to use at a price you can afford.

Conventional webcams limit the amount you can see. Typically you have a small viewing field allowing you to see only the area directly in front of the camera. If you want to look in any direction other than straight ahead you will have to have someone move the camera. WebEye VR was born out of an interest to communicate via webcam in VR. Our lead engineer Dmytro tried to buy a stereoscopic webcam and found there were none on the market so he decided to make his own by buying two regular webcams and combining them. From these humble beginnings WebEye VR grew.

For more information on the new WebEye VR jump over to the Kickstarter website for details and to make pledge from $250 for the developer kit.