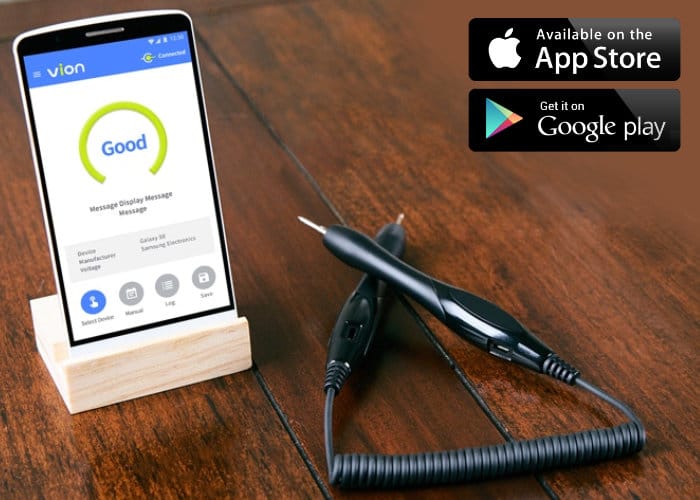 Allectrics eastern United States has created a new Bluetooth multimeter called the Vion, which has been created to provide the “simplest smart multimeter” for the everyday person. Watch the demonstration video below to learn more about the Vion and its features which make it the “ world’s simplest” Bluetooth multimeter offering automatic detection and “expert diagnosis”.

Using the companion smartphone application which is available for both Android and iOS devices the Vion Bluetooth multimeter measures voltage and resistance using a pair of separate probes, with the readout automatically sent to your smartphone screen. “Most multimeters require you to have extensive electrical knowledge to understand the number displayed on the LCD in order to determine the fault. However, Vion is linked to the smartphone and automatically measures the product without having to select a measurement item and diagnoses the result as ‘Good/Bad’ through voice guidance. “

Features of the Vion Bluetooth multimeter include an automatic mode the measures the probes, whether you place it on a rotary switch, AC switch, or a resistance switch. When using existing multimeters if the placement of the probes is slightly off, even by a little, the multimeters internal circuit could be damaged. Vion, however, is easily manageable, as there is no body or internal circuit board to damage. Measurements are immediately stored and transferred to the companion application so you don’t need to manually write anything down.

For more information jump over to the official Kickstarter crowdfunding campaign page where Vion is now available to back with super early bird pledges available from $40, and shipping expected to take place during June 2018.