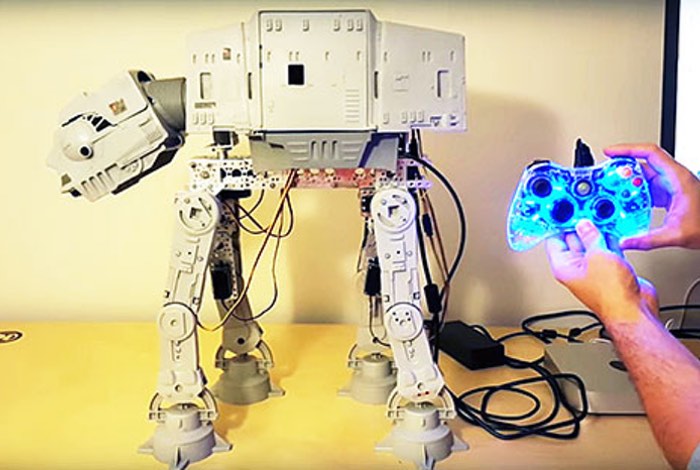 Software engineer and Arduino hobbyist Dave Stein has given life to his vintage Star Wars AT-AT toy thanks to a little Arduino magic and an Arduino UNO development board.

After the Arduino modification the AT-AT Walker is now able to walk and perform some functions we see in Star Wars movies, check out the video below to learn more.

The AT-AT is controlled by a wired Xbox 360 controller that has been interfaced with a PC and then sends a signal to the Arduino Uno board to make the movements requested. Stein explained a little more about his creation and the build process.

The left and right triggers move the walker forward and backward while the right stick moves the head horizontally. If you have ever played with this toy you may remember it was clumsy and difficult to move. In my project I wanted to learn about and conquer the difficulties of quadrupedal movement.

The realization process for my project involved a massive amount of trial and error, research, and failures. I have to say that I failed many more times than I succeeded with configuring the servos with the Arduino.

I went down many long roads to learn about prototyping with the breadboard, soldering, and redesigns of the final product. The most difficult part of the project aside from adjusting the gait of the walker for balance and movement was providing enough power to the servos without frying the microcontroller or any of the components. I was finally able to overcome these difficulties by implementing the Adafruit servo shield.