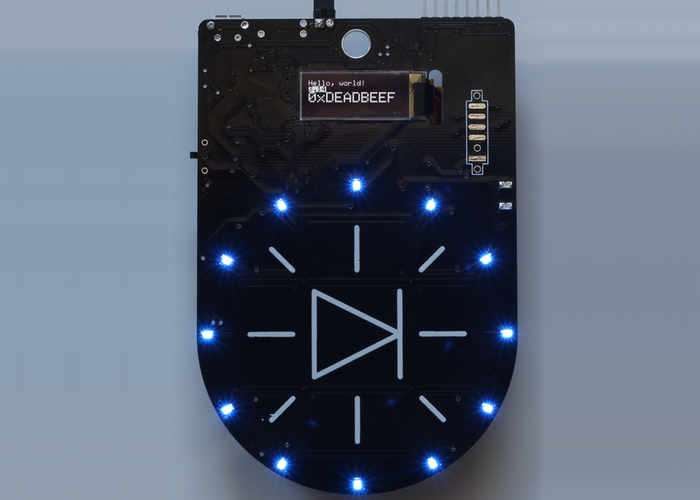 If you are attending DefCon 2017, you may be interested in a new wireless badge which has been created by Mr Blinky Bling and launched by Kickstarter this week with the aim of raising just $4,500 to go into production.

The wireless badge is powered by an AA battery and is available to back via the official Kickstarter campaign page with pledges starting at $45, with shipping throughout the US taking place during August 2017.

The developers of the 2017 WiFi Badge explain more about its design, inspiration and features:

We’ve designed a new badge with DefCon in mind that we want to make available to everyone. This badge comes with WiFi capability due to the on-board ESP8266 module.  It is Arduino compatible and we’re including an Arduino sketch with examples to show you how to interface with the hardware on the badge.  In order to keep things simple we’re creating an interface to a second chip, the ATTiny88, that will handle the LEDs and capacitive touch buttons auto-magically for you.

The badge comes with the ability to scan for and display SSIDs on the 128×32 OLED screen and will light up the appropriate LED for each WiFi channel.  These LEDs can also be used to display various bling animations. We need your help to order enough of these from China to make them worthwhile.  We want to make at least 100 of these badges. If you buy a badge you will get the sticker and challenge coin!

Jump over to Kickstarter to make a pledge to own your very own unofficial DefCon badge equipped with ESP8266, Arduino and LEDs.