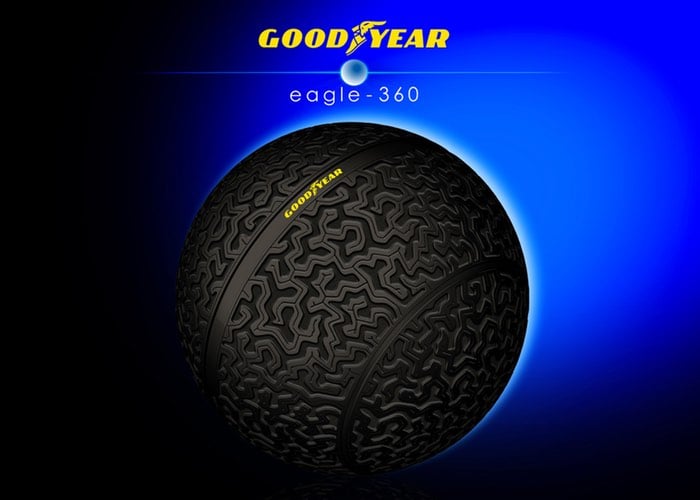 Tire manufacturer Goodyear has unveiled a new concept 3D printed tire they have created at the Geneva International Motor Show, which is spherical in shape and being designed for the autonomous vehicle era which is edging closer and closer.

Researchers are indicating that 85 million self driving vehicles are expected to be sold annually by 2035 and Goodyear is already busy at work developing the tyres that will be used by these vehicles and has unveiled the Eagle 360.

The unique spherical tyre is connected to the body of the car using magnetic levitation, which keeps the tyres suspended from the car by magnetic fields similar to those used on magnetic levitation trains. The use of magnets increases passenger comfort and reduces road noise. Watch the promotional video below to learn more about this very unique tyre.

The unique shape of the Goodyear Eagle-360 could contribute to safety and maneuverability to match the demands of autonomous mobility.The spherical shape of the tire is key to delivering ultimate maneuverability. The multi-orientation tires move in all directions, contributing to passenger safety. Active technology allows the tire to move as needed to reduce sliding from potential hazards, such as black ice or sudden obstacles, so it contributes to staying on a safe path.

In addition, the spherical shape of the Goodyear Eagle-360 provides a smooth ride by creating a fluid, lateral movement. This helps the car to overtake an obstacle without changing its driving direction.

Finally, because 360 degree turns are possible with this tire, it could tackle anticipated parking constrictions of the future, as less space will be needed for cars fitted with spherical tires to pull into parking spots. Assuming public parking areas play the same role, this could significantly increase the capacity of public parking areas without increasing their size.

For more information on the new Goodyear Eagle 360 jump over to the Goodyear website for details.