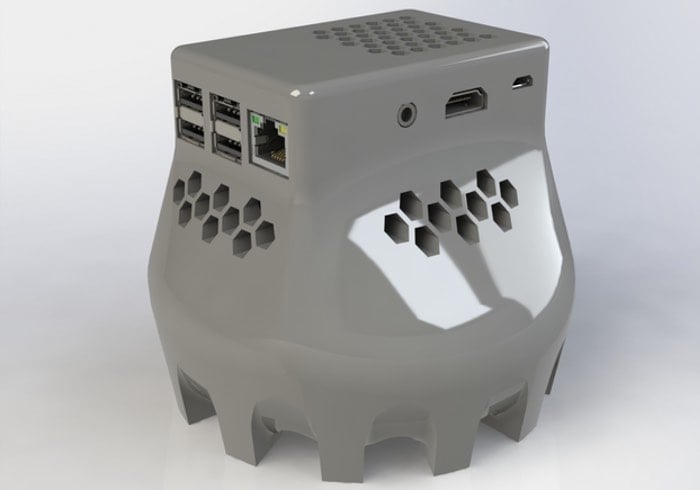 Thingiverse user Tripnutz has created a new Raspberry Pi 2 case called the GR8 Pi model 2 that encloses an 80mm fan to help keep the Pi mini PC system cool while in use and overclocked.

Making a feature of the 80mm fan has created a very unique case which houses both the cooling system and the Pi mini PC in a fully 3D printable case, with all the files necessary to create its components available via the Thingiverse website.

Tripnutz explains more about the Raspberry Pi case and its inspiration and construction.

Another variation of the Raspberry Pi model 2 . This one uses an 80mm fan in the base. I made the first pictured at a fast low resolution speed. Made a couple tweaks and putting it up for review. I will print this tweaked version later this week. So stay tuned I may update if I find any other issues. I added a cone inside layer 2 that forces the air right up to the Pi and then has to roll down the sides to exit the honeycomb vents.

Have to attach PI to layers 2 and 3 first. Make sure to plug fan into Pi before mounting because after layer 2 and 3 together ( using 4 m3 x 16mm screws ) you cant really reach up into it very easily. Then you can place fan into base and then attach layer 1 , base , to your assembled layer 2 and 3. I used 4 #6 x 1.25 long screws to mount layer 1 to layer 2. no tapping required I found on this version everything went together by hand.

For more information on the GR8 Pi model 2 Raspberry Pi case jump over to the Thingiverse website for the files to 3D print your very own via the link below.