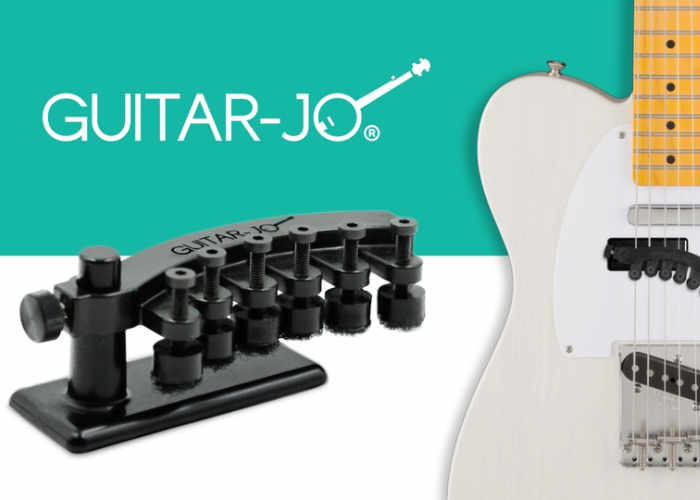 Musician Jon Langberg has created a new guitar accessory called the Guitar-Jo which transforms your electric guitar into a banjo and is now available to purchase via Kickstarter with pledges starting at just $25 and shipping expected to take place during February 2018. Watch the video below to learn more about Guitar-Jo and its unique design.

Jon Langberg, the creator of Guitar-Jo, never intended for his invention to amount to anything besides another fun project that he would use one time for music night at his church. One night, he was preparing electric guitar accompaniments for it, and there was one song in particular that he thought really needed a banjo. He had never played one before and couldn’t afford to buy and learn a whole new instrument with a timeframe of 1 week.

He searched for digital effects patches that he could input into his multi-effects processor, and when he could not find any, tried creating his own patches. After tinkering around and researching online for some time, he found out that digital effects fell drastically short and would not suffice.

The only thing that seemed to somewhat work was placing a cloth underneath his guitar strings. It was very inconsistent, falling out of place as he played, and took too much time to find the right placement. He needed to create something more practical and consistent that could be used in a live performance setting, so he drew up some plans and used his uncle’s workshop to create it. The device attached to the body of the electric guitar with suction cups. A fabric was placed on the underside of the device and could be lowered down by turning the wing-nuts until it made just the right amount of contact with the strings, which was much more consistent with the sound of an actual banjo.

For more information on full list of all available pledges jump over to the Kickstarter campaign page by following the link below.