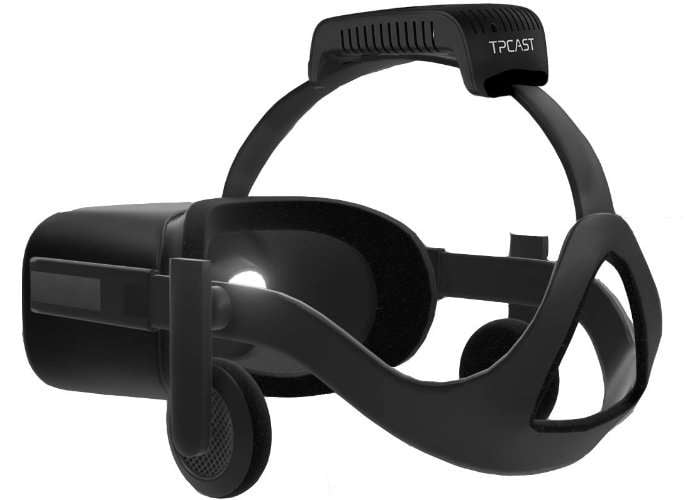 After Previously being unveiled for the HTC Vive virtual reality headset, hardware manufacturer TPCAST will be very soon making available then you Oculus Rift Wireless Adapter, which is expected to be made available in the U.S. before the end of 2017. As the name suggests the TPCAST Oculus Rift Wireless Adapter allows users to enjoy immersive virtual reality experiences without the annoyance of being connected to a powerful PC via cables. If you have ever used a wired virtual reality headset you will already know that if the cables are not positioned correctly or hung from the ceiling, while using room scale technology the cables can give an annoying tug to the users head and break the immersive VR experience.

TPCAST has been developing wireless adapters to remove this annoyance and allow virtual reality users to explore their environments without the need to connect directly to the master computer. Unfortunately, no information on pricing or worldwide availability has been released as yet by TPCAST for the Oculus Rift Wireless Adapter, but as soon as information comes to light, we will keep you updated as always.

“TPCAST is committed to support the Oculus Rift HMD with our unique wireless technology solutions, and provide VR users a high-quality, immersive VR encounter,” stated Michael Liu, TPCAST CEO. “With the TPCAST wireless adapter, we will be changing the VR usage and experience by providing the complete freedom of movement with no cables attached.”

The wireless adapter supports 2K video transmission at 90Fps with sub 2ms latency. The adapter comes with a battery to power the headset and the wireless module and can last for up to 5 hours of operation. This wireless adapter gives enterprise content developers the freedom to create more innovative content in many industries including automotive, healthcare, oil & gas, real estate and more.

“We have been using the TPCAST wireless solution daily for the past month and it really takes VR experiences to the next level. TPCAST support for Oculus Rift, one of the leading HMD vendors, is a great win for the entire VR community,” said Karl Krantz, CEO of SVVR.