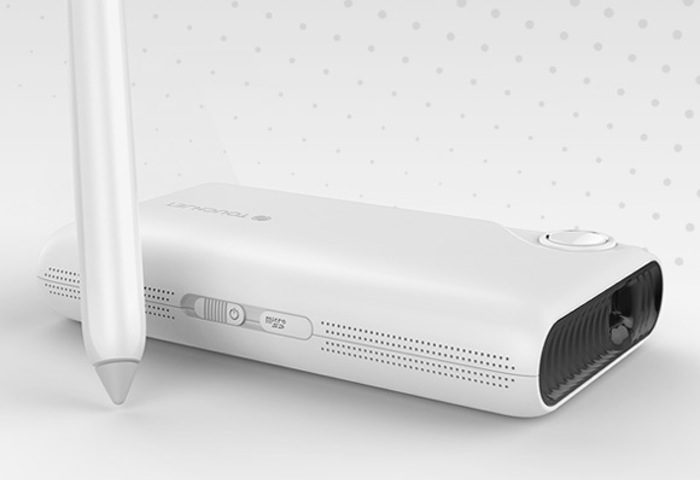 A new handheld projector has launched this week over on the Indiegogo crowd funding website which has been designed to transform any surface into a massive 80 inch interactive touchscreen.

The TouchPico has already received over $200,000 in pledges and is ready to make the jump from conceptual prototypes into production after requiring just $55,000. There are still 26 days left of the Indiegogo campaign and you can learn more about the TouchPico projector in the video after the jump.

TouchPico is a tiny handheld projector and Android PC that creates a projected touch interface and uses wireless streaming that allows you to:

– Interact with the use of an infrared stylus to touch the wall, in a similar way to how you would with a touchscreen device.
– Download apps from Google Play
– Interact in two-way communications i.e via Skype

Its creators explain : “TouchPico is magic…well, not really. It is pretty high-tech.  Our infrared detection technology tracks the stylus and allows you to control and interact with the image that is projected on any surface at 40 frames per second.

The stylus has a tiny infrared emitter. Its signal is captured by the TouchPico’s tiny built-in infrared camera and processed by an image processor to convert it into touch screen coordinates. TouchPico is a portable, handheld gadget for those on the go. It’s slightly heavier than a Samsung S4 phone and just about the same size.”

So if you think TouchPico is something you could benefit from, visit the Indiegogo website now to make a pledge and help TouchPico become a reality and be one of the first to own one.