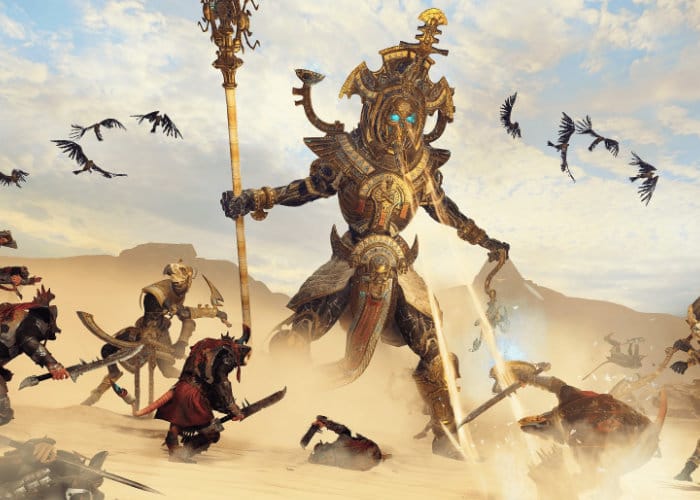 – Settra the Imperishable, the king of kings, who doesn’t need to rest in a sarcophagus and has an unlockable Warsphinx and Chariot of the Gods mount.

– High Queen Khalida, who can reduce all forms of corruption, buff ammunition for ranged units in her faction and grant poison attacks.

– Arkhan the Black, a Liche King, who gets on well with vampires so his regions never suffer from Vampiric corruption. His heroes get melee attack and defence bonuses and his armies get a boost to their Winds of Magic Power Reserve.

Across the arid deserts of Nehekhara, vast legions of skeletal warriors rise from beneath the baking sands to slaughter those who trespass into their domain. It is a lifeless realm of endless dunes, stained red from the blood of savages and barbarians. This is the Land of the Dead, where mummified kings are cursed to rule in perpetual unlife. But it was not always thus.

There was a time when the ancient kingdom of Nehekhara stood as a crown of human civilisation; a golden age when its cities shone with majestic splendour, its armies conquered entire nations and its kings ruled as gods among men. But this realm was razed millennia ago by the treacherous sorcery of reviled Nagash: in a stroke, the living perished and the dead rose from their tombs.