Announcing that the Titanfall game will be available in stores for Xbox One, Xbox 360, and PC on March 11th, 2014 in North America and Friday March 14th, 2014 in Europe and Australia. Unfortunately Titanfall is and exclusive for Xbox 360, Xbox One and Microsoft Windows systems. 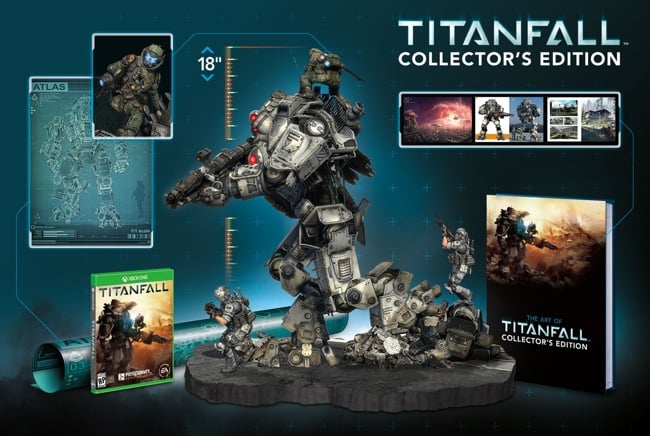 Respawn the games developers have also today announced that there will be a Titanfall Collector’s Edition box set available to gamers priced at a whopping $250.

The new Titanfall Collector’s Edition (pictured above) will include “an exclusive collectible 18-inch hand-crafted titan statue with diorama and battery-powered LED lighting, a full-size art book featuring more than 190 pages of rare concept art, and an exclusive full-size schematic poster of the Atlas titan”

Within the new Titanfall game, players have the choice of either being on foot as free-running “pilots” or inside agile mech-style walkers called “Titans”. Enabling them to complete team-based objectives and fight the opposing team.

Watch a recent Titanfall promotional video below to learn more from the EB Expo Arena, as Respawn Community Manager, Abbie Heppe demonstrates and talks you through the new Titanfall game.