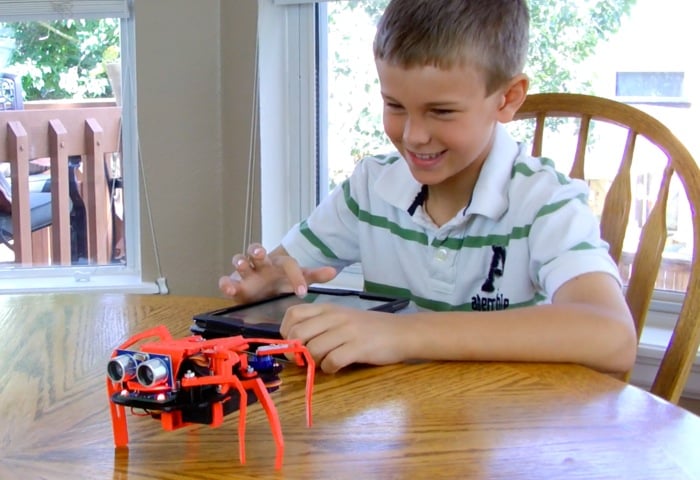 Hobbyists, makers and children that enjoyed building Arduino powered devices might be interested in this six legged walking robot kit which is powered by the Arduino platform and can be controlled using its companion iOS application.

The TipToe robot kit has been designed as a easy and quick introduction to robotics and the kit can be assembled in around 30 minutes from start to finish, using a small Phillips screwdriver and a set of pliers.

The walking robot kit is powered by 4 x AAA batteries and connects to your iOS device either iPhone, iPad or iPod using Bluetooth 4.0, with no programming experience necessary to set-up the robot. Watch the video below to learn more about the walking robot kit project and see it in action. Its creators explain a little more:

“TipToe has six legs, but uses a simple design with only three servo motors. There are other six legged walking robots available, but they use many more servo motors and cost $250 or more.

TipToe starts at under $100 and includes a ready to run app. We have worked with robotic kits that offer software to operate them but have frequently found their software to be limited and sometimes not even functional.

This can be a very discouraging experience and turn off many to robotics, especially young folk just starting out in robotics. The fully integrated hardware, firmware and software of TipToe solves this problem.”