There’s been a new breakthrough in submarine technology and it has nothing to do with either stealth, sonar, or design. It’s a flexible underwater fin whose mechanics were derived from a species of Amazonian knifefish. Why is it important? Cos future robo-submersibles could use it to move around in the deep. 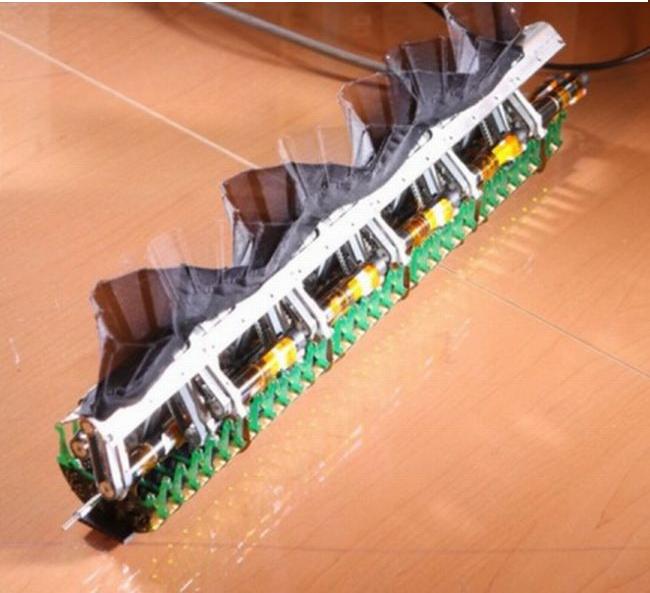 The ribbon fin pictured above is the work of a unique tandem that’s one half the scientific consultant for Tron Legacy (Malcolm MacIver) and the other half a brilliant mechanical engineer (Neelesh Patankar). Malcolm MacIver and Neelesh Patankar, first observed the knifefish’ complex moevments, which can move up and down, forward and back, by manipulating the currents in its underbelly fin. They then made a computer model and from there decided to build a replica.

To realize their new propelling mechanism, the duo got in touch with Kinea Design, who spent several months on the project. Harvard was the next stop for testing and here’s a chunk off the source article for detailed explanation:

“The group took the robot to Harvard University to test it in a flow tunnel in the lab of George V. Lauder, professor of ichthyology and co-author of the paper. The team measured the flow around the robotic fish by placing reflective particles in the water, then shining a laser sheet into the water. That allowed them to track the flow of the water by watching the particles, and the test showed the water flowing around the biomimetic robot just as computer simulations predicted it would.”

Yet new frontiers remain to be explored, according to Prfessor McIver: “By simulating and then performing the motions of the fish, we’re getting insight into the mechanical basis of the remarkable agility of a very acrobatic, non-visual fish. The next step is to take the sensory work and unite the two.”