We have seen a lot of geeky clocks here at Geeky Gadgets, but I would have to say this is probably one of the geekiest, the Geek Clock.

On the Geek Clock all the numbers have been replaced by the equivalent notation, have a look at the photo below and see if you can work them out, cheat sheet after the break. 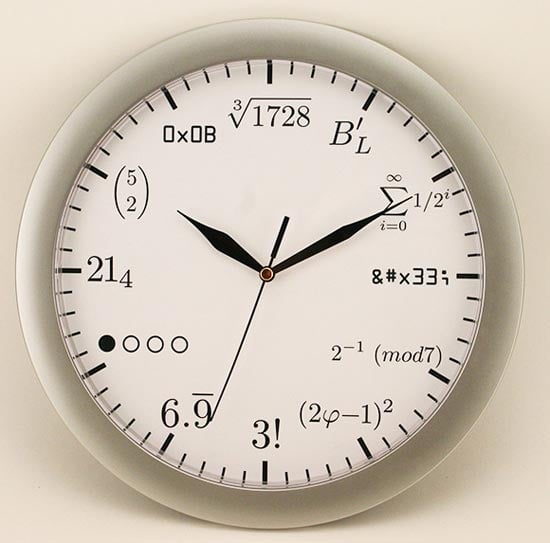 Cheat Sheet:
12 – the cubed root of 1728
1 – Legendre’s constant is a mathematical constant occurring in a formula conjectured by Adrien-Marie Legendre to capture the asymptotic behaviour of the prime-counting function. Its value is now known to be exactly 1.
2 – A joke in the math world: An infinite number of mathematicians walk into a bar. The first one orders a beer. The second orders half a beer. The third, a quarter of a beer. The bartender says, “You’re all idiots,” and pours two beers.
3 – A unicode character XML “numeric character reference.”
4 – Modular arithmetic, also known as clock arithmetic, is a system of arithmetic for integers, where numbers “wrap around” after they reach a certain value.
5 – The Golden Mean…reworked a little.
6 – Three factorial (3*2*1=6)
7 – Repeating decimal that rounds up to 7.
8 – Graphical representation of binary code.
9 – An example of a base-4 number, which uses the digits 0, 1, 2 and 3 to represent any real number.
10 – A Binomial Coefficient
11 An example of Hexadecimal encoding.

The Geek Clock is available for $25 from Uncommon Goods.