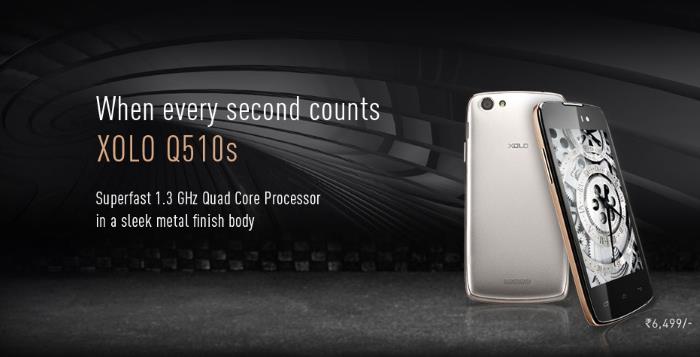 The smartphone market in India is becoming more competitive with every passing day. The companies are releasing devices with a decent set of specifications carrying a very budget-friendly price tag.

Recently, Xolo Q510s was officially unveiled by the company, a device that comes with a very pocket-friendly price tag of Rs. 6,499 (almost $105).

The device rocks a 4-inch display sporting a resolution of 480 x 800 pixels, and is powered by a quad-core MediaTek MKT6582M processor clocked at 1.3GHz with 1GB of RAM on board. On the storage side, Xolo Q510S features 8GB of internal storage with a microSD card support of up to 32GB for expansion.

Other features include a 5MP camera for photos and videos with a VGA front-facing camera, dual-SIM support, a 1,500 mAh battery and runs Android 4.4 KitKat as its operating system out of the box. The handset is available in gold color frame, with a black front and white back.

The battery may be considered a little small, but considering that it doesn’t have to support top notch internals, it should be good enough for most of the tasks and may give you a decent battery time on moderate usage.