Dustin Evans is a big fans of the Avengers film and decided to create his very own Tesseract case media centre that he built using Arduino and a Raspberry Pi mini PC together with a few other components.

In all the Tesseract case media centre has been constructed using an Arduino with a spectrum shield and BlueSmirf Bluetooth Modem, a Raspberry Pi mini PC, a 7″ LCD Monitor, 2 x speakers, a digitalamp, a WiFi Card and two strips of NeoPixels. Watch the video after the jump to learn more about the Tesseract Case media centre project and see it in action. 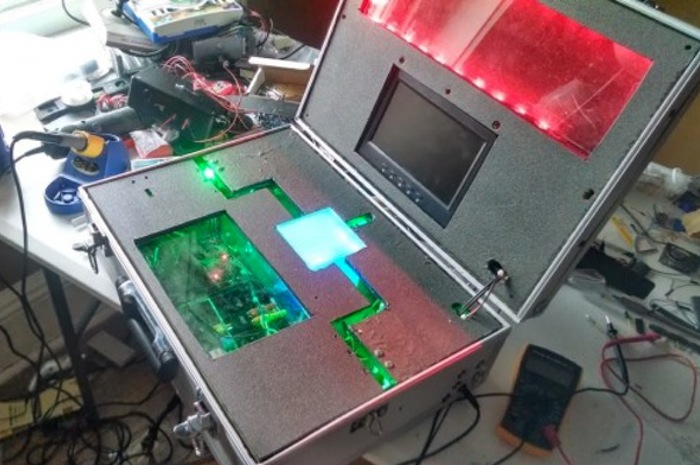 Dustin Evans explains a little more about the inspiration and build of his Tesseract case : “The Avengers is one of my favorite movies from recent years. I really like the way all of their story lines come together in a huge epic battle. I saw a guide online awhile back on making your own Tesseract and wanted to build my own case, too.

I’m running Raspbian on the Pi with a stand-alone version of XBMC. I followed this guide to make the Pi broadcast its own wireless network. That setup along with AllCast allows me to send movies on my Nexus 7 to the Pi without me having to touch a thing.

This is great because I conduct electricity like a member of the X-Men and actually broke one of my LEDs when I zapped the case on accident. The Bluesmirf allows me to connect to, and change the LEDs with a custom Android app I wrote.”

For more information on the awesome Tesseract case media centre jump over to the Dustin Evan’s website for details.