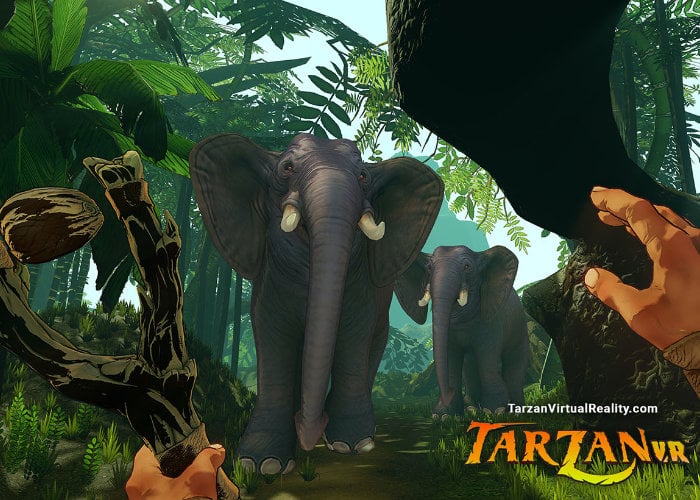 The first gameplay trailer has been released for the upcoming Tarzan VR game currently being developed by Fun Train in association with Edgar Rice Burroughs Inc. and Stonepunk Studios. Tarzan VR is an episodic single-player adventure with carefully balanced elements of exploration, combat, athletics, creature interaction and natural wonder, say its creators. TO play Tarzan VR you will need a HTC Vive, Oculus Rift, or Valve Index.

“Welcome to the Jungle! Journey through the fantastic lands of Tarzan in an epic adventure created especially for virtual reality. Swing, swim, climb and fight your way across savage lands where the only limits are your own imagination. Players can swing, climb, swim, and fight their way across five expansive environments that each offer their own unique danger and discoveries. Issue 1: The Great Ape – Jane has been abducted by a group of invaders, and Tarzan must seek the wisdom of The Great Ape in order to uncover the motives of her mysterious captors. Issue 1 also grants access to Tarzan’s treehouse and home island. Issues 2, 3, 4 & 5 can be purchased episodically- each unlocking a new weapon and region of the world to explore and conquer.”

Features of the Tarzan VR game include :

– SWINGING – Swing effortlessly from vine to vine across spectacular landscapes. Swing “Hand over Hand” to incrementally increase swing speeds.
– CLIMBING – Scale trees and rock faces to climb high into the jungle canopy to survey your surroundings.
– SWIMMING – Use powerful swimming skills to navigate ocean currents and avoid dangerous undersea threats.
– RIDING – Ride confidently through dangerous or impassable terrain with the help of jungle friends.
– FIGHTING- Use items such as spears, bows, axes… and even your fists!
– CALL OF THE WILD – The rallying cry known to all life in the jungle can summon allies of many kinds, including Elephants and Gorillas.
– EARTH VISION – Use enhanced sight to reveal hidden paths within the jungle, or track your enemies.
– SKY VISION – Use the creatures of the sky to navigate areas unreachable by normal humans.
– FISH EYE – Use a unique underwater vision for clearly seeing into depths of the ocean.