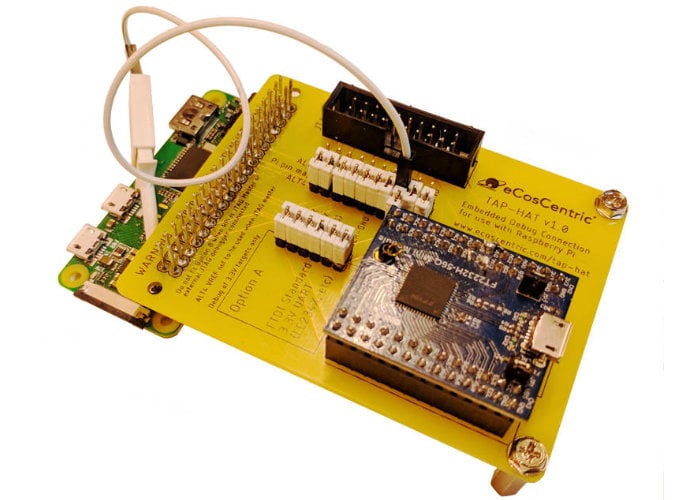 Electronic enthusiasts and Raspberry Pi users may be interested in a new JTAG debugger board called Tap-Hat which has been created by the team at eCosCentric. The TAP-HAT has been designed to provide a straightforward fool-proof connection of external JTAG debuggers. Including popular hardware debuggers such as the Lauterbach TRACE32, Ronetix PEEDI, SEGGER J-Link and others.

To get started simply connect the hardware debugger’s standard 20-way ARM JTAG cable to the TAP-HAT’s JTAG socket and boot your Raspberry Pi. If desired remote reset of the Pi is supported by connection of included flying probe to the Pi reset pin.

Features and connections available from the JTAG debugger board include :

– USB-connected debugging of a code on a Pi board (using an add-on module, see below)
– Connection of external debuggers to a Pi
– Use of the Pi as a network attached-debugger (with OpenOCD server running native on Pi) to debug another Tap-Hat-connected Pi or other embedded target with external 3.3v JTAG/SWD connections – so long as OpenOCD support is available for the target.
– Low-cost multi-purpose JTAG debugger for Raspberry Pi boards
– Optional add-on modules enable USB-connected debugging of Pi and/or UART debug output
– Straightforward attachment of external JTAG debuggers to the Pi
– Use with OpenOCD server running native on Pi to create a low-cost networked hardware debugger
– Stackable reverse-HAT design allows concurrent connection of standard peripheral HATs
– Redboot bootloader supports configuration of Pi JTAG pin map and high-speed serial debugging
– Supports JTAG initiated system reset of Pi
– Can be used for bare-metal applications, eCosPro RTOS applications, and other OSes such as Linux