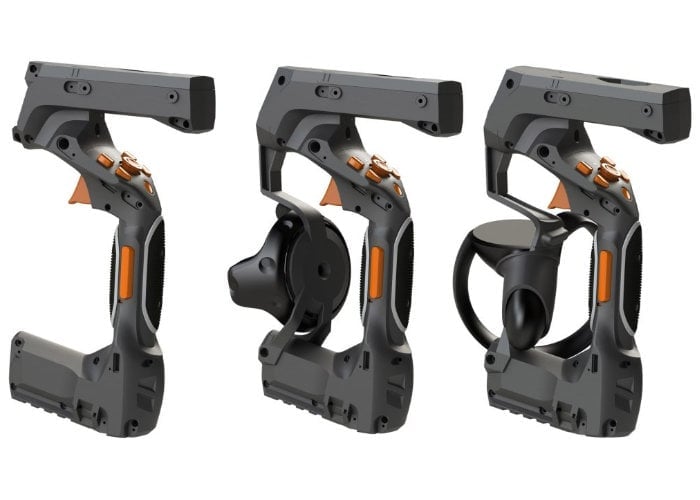 Virtual reality enthusiasts patiently waiting to get their hands on the new previously unveiled Tactical Haptics Reactive Grip VR controllers, will be pleased to know that preorders will start later this month and will be available to place from May 29th, 2019 onwards. Development kit preorders will be made available first for the enterprise and LBE sectors, with controllers expected to be priced at around $650 each. Worldwide shipping is expected to take place sometime during Q4 2019. Watch the demonstration video below to learn more about the Tactical Haptics Reactive Grip VR controllers and their futures which have been steadily improved since their first unveiling over two years ago.

The development team at Tactical Haptics explain more about their new VR controllers and what you can expect. “Reactive Grip touch feedback can be used to convey motion and force information using tactile feedback integrated into the handle of a device. The device utilizes sliding plates in the surface of the handle of the controller, which mimic the shear and friction forces one would feel if they were interacting with real objects. Because of its ability to recreate the skin sensations of actually holding an object, this type of feedback creates an engaging experience that brings gaming interactions to life. “

“We have named this feedback technology “Reactive Grip” Tactile Feedback, since the device responds or reacts to the user’s motions and actions. We have also developed a new means to form different gaming peripherals on-the-fly with our Multi-Pose™ Magnet Brackets. Our current haptic game controller is compatible with the major PC VR platforms such as the HTC Vive, or Oculus, and Windows MR.”

For more details on the new haptic game controllers that use the company’s novel form of touch feedback to bring new levels of realism to virtual reality, jump over to the crucial Tactical Haptics website by following the link below.