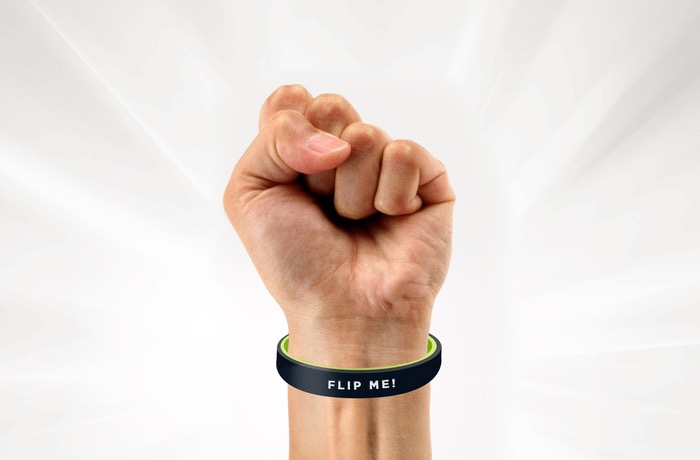 If you have set yourself some New Year goals but are worried you might not be able to keep up the motivation to stick to them as the weeks tick by. You might be interested in a new wrist worn a motivational device created by Victor Mathieux called the Flip Band.

Flip Band has been created to help you remember the new goals you set and increase the chances of you succeeding, using a simple science backed feature. Watch the video below to learn more about this new motivational device.

The Flip Band project is currently over on the Kickstarter crowd funding website looking to raise $7,500 in pledges to make the jump from concept to production.

“One day, I realized that despite having 3 reminders set on my phone to “do pushups & take vitamins,” I STILL WASN’T DOING IT. Turns out a lot of people have something they wish they did more often but don’t. So I decided to use my 10 years of design + behavior change experience to come up with a solution. Soon afterwards, FLIP BAND was born.

FLIP BAND is a wristband you wear as a reminder to do a goal of your choice, whether that’s exercising, meditating, or just taking your vitamins. The act of wearing the band alone already makes it close to impossible to forget your goal, but here’s the cool part… it’s double-sided, and you only get to flip it to its green ‘feel good’ side after you reach your goal for the day. FLIP BAND seems very simple, but it leverages a wealth of learnings from behavioral psychology and operant conditioning to effectively increase your chances of sticking to your goals in the long-term.

I originally had no intention of turning FLIP BAND into a product but after seeing how effective it was for friends and family I had to share it with other people. So here I am, Kickstarter!”

So if you think Flip Band is something your New Year goals could benefit from, visit the Kickstarter website to make a pledge and help Flip Band become a reality via the link below.