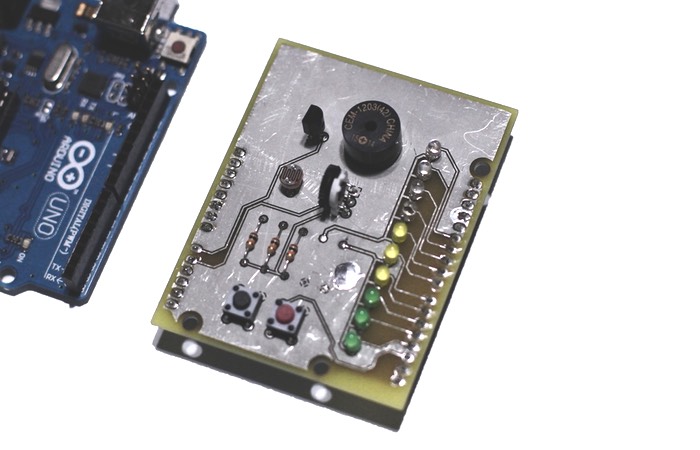 Anyone who has just started programming with the Arduino platform and is not quite sure which direction to take, but would like to learn more about the basics. May be interested in a new Arduino starter shield that has been created by Matt Wirth.

Matt has created the starter Arduino Shield to help new Arduino users easily learn the basics to get them up and running as quickly as possible by programming sensors and other components that can then be used in a variety of different electronic projects.

The Arduino Shield project is currently over on the Kickstarter crowd funding website looking to raise just $1,500 in pledges to make the jump from concept to production. Matt explains more :

“The Starter Shield is the best way to get started with programming the Arduino Uno right out of the box. With this Starter Shield, you will learn the basic foundations of programming the inputs and outputs (I/O) of a microprocessor without having to wire and assemble intricate parts. If you do love to solder, there will be the optional kit that allows you to assemble your own board.

The foundational programming you learn with the Starter Shield will help you understand more complex Arduino projects. From there, you will be on your way to creating cool and exciting projects of your own!

The Starter Shield will come with lessons for each component on the Starter Shield. These lessons will ultimately lead up to fun and exciting ways to combine these components to interact. Some of the cool things you could do include; Police Lights and Siren, Temp Sensor Alarm, Light Meter, and Many more!”

For more information on the new Starter Arduino Shield jump over to the Kickstarter website for details and make a pledge from $27 to be one of the first to own one.