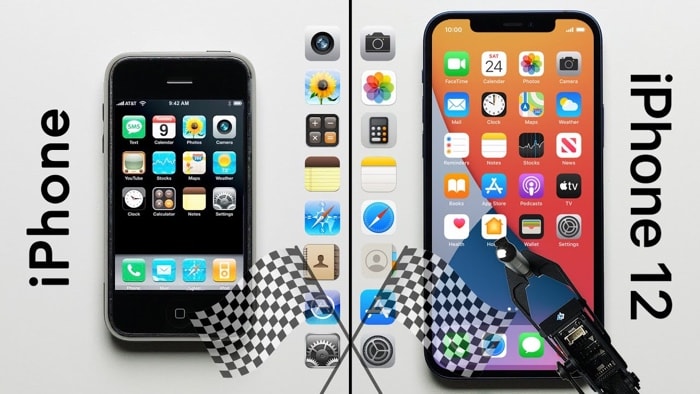 The first iPhone of iPhone 1 was made official by Apple in January of 2007, the handset launched that year and now we have a speed test of the iPhone 1 vs iPhone 12.

The original iPhone launched 14 years ago and now we get to see how the handset compares to the current model, the iPhone 12 in terms of speed, lets find out in the iPhone 1 vs iPhone 12 video.

It is amazing how much smartphones have changed over the last 14 years, the original iPhone came with a single core 412 MHz processor, the iPhone 12 has a 6 core 3.1GB processor.

As we can see from the video the difference between the two handsets is massive in terms of speed, the iPhone 12 took just 40 seconds on the first lap and 1 minute in total. The iPhone 1 took 1 minute and 26 seconds for the first lap and a total of 2 minutes and 29 seconds.

It will be interesting to see how much smartphone change in the future and how much faster they become over the current models.