The great Sparrow Mail application which launched last month for iPhone, has today received a new update taking it to version 1.1 and adding a number of great new features.

New features include a new built-in web browser, together with features that allow you to now show/hide dock badge per account, send and archive, empty trash and empty spam, and only show specific labels and folders. 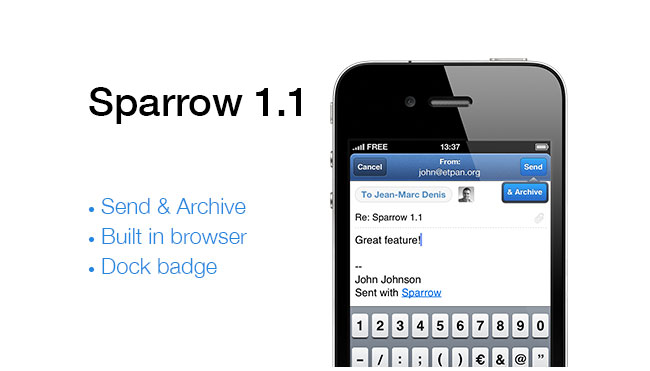 The update also includes a couple of bug fixes for the issues some users experienced while authenticating with some Google apps account, as well as an issue with custom SMTP for alias.

The development team are wasting no time on update their new iPhone mail application and say that updates will “evolve fast and integrate feature requests and bug fixes” just like the Mac application did when it was released.

With regards Push functionality for Sparrow Mail, here is an update from the Sparrow team:

“Thanks to your amazing support, we feel confident that Apple might revise its position on the Push API. We’ll submit a first version of Sparrow 1.2 including it. This might delay Sparrow 1.2 validation but we’re already working with some partners to include Push in future versions of Sparrow without needing Apple clearance.”