Say hello to the Super aEgis 2, a fully automated modular weapon system/sentry gun that was recently showcased in South Korea’s Robot World Expo 2010. On the pic below you see it packing a .50 calibre machinegun, but this weapon right out of Skynet’s arsenal can be armed with missiles and grenade launchers too. 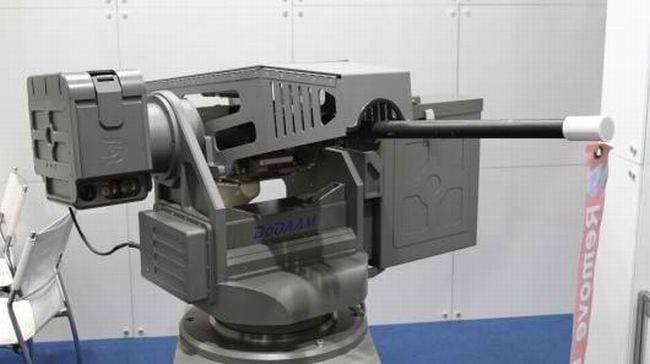 Thanks to its more prosperous economy, South Korea has what it takes to develop super-advanced weapons that make their Northern adversary’s arsenal look antiquated in comparison. From the utterly fearsome K11 assault rifle, to what is arguably the world’s most advanced main battle tank, or floating naval bases, South Korea definitely possesses awe-inspiring hardware.

Though remote-controlled and/or robotic armaments like UAVs and tracked drones have become rather prominent in the last 10 years, this latest from defense contractor DoDamm  has the potential to be deployed in greater numbers than ever before along the DMZ. Aside from having a few hundred thousand soldiers guarding their side of the fence, it is widely believed that this all-weather night-vision equipped intruder destroyer will be deployed alongside its human counterparts soon.

Thanks to its modular features and range of capabilities (it’s equipped with a LAN connection, CCD camera, and an infrared sensor), the high tech wizardry of the Super aEgis 2 makes it a viable export product. Even though it has never exported armaments before, there’s word that DoDamm might be showcasing this to potential foreign clients.