Created by Chao & Eero Jewel, the smiley face ring is what would be deemed a neutral fashion accessory. It caters to neither sexes but fits both male and female wearers. As seen in the picture below, the ring forms a smiley face on the finger it’s worn on. Not sure if it’ll also leave a smiley face on the person you decide to punch. 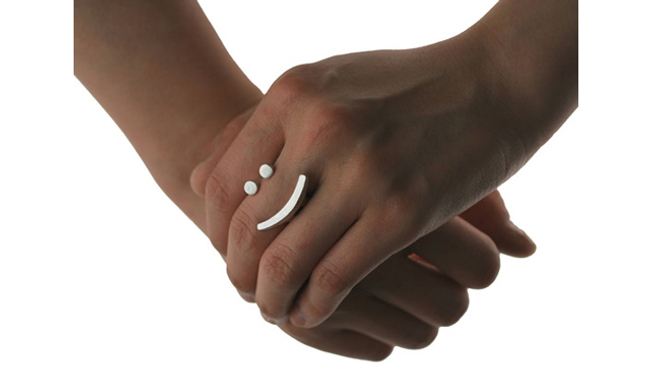 Apparently, as most pieces of jewelry or nice accessories that aspire to some artistic merit go, the smiley face ring is meant to express the spirit of our times. Really? Not actually sure, but smileys are ubiquitous enough for people to get it when they see you wearing the ring.

We do foresse, in the event that this ring is worn a lot, that the two ‘eyes’ and the curved metal forming the spine (it’s made of silver, by the way) will create callouses on the other fingers it rubs against. We’re not complaining, as callouses are manly. Then again, who would wear a ring night and day? Dracula?

Available in three sizes and selling for 126 euros, these smiley face rings fits any conceivable style. Just don’t go all Victorian with a top hat included. That wouldn’t work. Or would it?