Forget about robots taking over the world, as we now have something else to worry about, Synthetic life forms.  Researchers in the US have developed the first synthetic living cell.

DR. Craig J. Venter has created a synthetic life cell by inserting DNA-like code into a group of cells, he generated a digital code using a computer, and now it is somehow self replicating as the genome in a group of living cells. 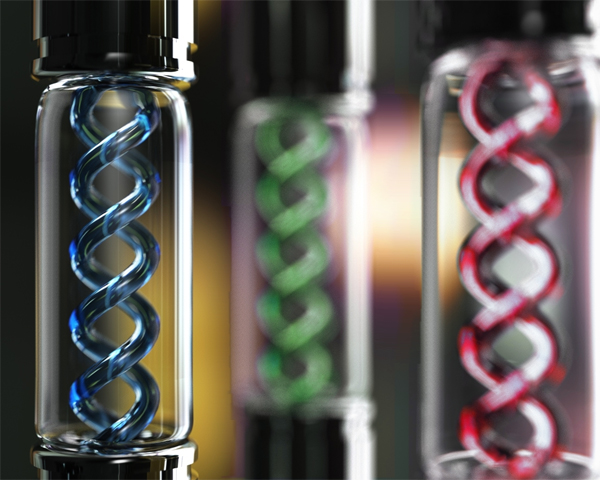 The scientists hope to use this technology to design a new bacteria, which could be programmed to perform specific functions, and they have even said that they could eventually developer a bacteria that could absorb carbon dioxide which could help repair damage to the environment.

You can see the full press release below, does this remind anyone of Resident Evil or is that just me?

Genomic science has greatly enhanced our understanding of the biological world. It is enabling researchers to “read” the genetic code of organisms from all branches of life by sequencing the four letters that make up DNA. Sequencing genomes has now become routine, giving rise to thousands of genomes in the public databases. In essence, scientists are digitizing biology by converting the A, C, T, and G’s of the chemical makeup of DNA into 1’s and 0’s in a computer. But can one reverse the process and start with 1’s and 0’s in a computer to define the characteristics of a living cell? We set out to answer this question.

In the field of chemistry, once the structure of a new chemical compound is determined by chemists, the next critical step is to attempt to synthesize the chemical. This would prove that the synthetic structure had the same function of the starting material. Until now, this has not been possible in the field of genomics. Structures have been determined by reading the genetic code, but they have never been able to be verified by independent synthesis.

In 2003, JCVI successfully synthesized a small virus that infects bacteria. By 2008, the JCVI team was able to synthesize a small bacterial genome; however they were unable to activate that genome in a cell at that time.

Now, this scientific team headed by Drs. Craig Venter, Hamilton Smith and Clyde Hutchison have achieved the final step in their quest to create the first synthetic bacterial cell. In a publication in Science magazine, Daniel Gibson, Ph.D. and a team of 23 additional researchers outline the steps to synthesize a 1.08 million base pair Mycoplasma mycoides genome, constructed from four bottles of chemicals that make up DNA. This synthetic genome has been “booted up” in a cell to create the first cell controlled completely by a synthetic genome.

The work to create the first synthetic bacterial cell was not easy, and took this team approximately 15 years to complete. Along the way they had to develop new tools and techniques to construct large segments of genetic code, and learn how to transplant genomes to convert one species to another. The 1.08 million base pair synthetic M. mycoides genome is the largest chemically defined structure ever synthesized in the laboratory.

While this first construct—dubbed M. mycoides JCVI-syn1.0, is a proof of concept, the tools and technologies developed to create this cell hold great promise for application in so many critical areas. Throughout the course of this work, the team contemplated, discussed, and engaged in outside review of the ethical and societal implications of their work.

The ability to routinely write the software of life will usher in a new era in science, and with it, new products and applications such as advanced biofuels, clean water technology, and new vaccines and medicines. The field is already having an impact in some of these areas and will continue to do so as long as this powerful new area of science is used wisely. Continued and intensive review and dialogue with all areas of society, from Congress to bioethicists to laypeople, is necessary for this field to prosper.