SanDisk has added another new MP3 player to its range with the launch of the Sansa Fuze+. The SanDisk Sansa Fuze+ features a 2.4 inch QVGA LCD display and it is capable of payiung a range of video and audio files. 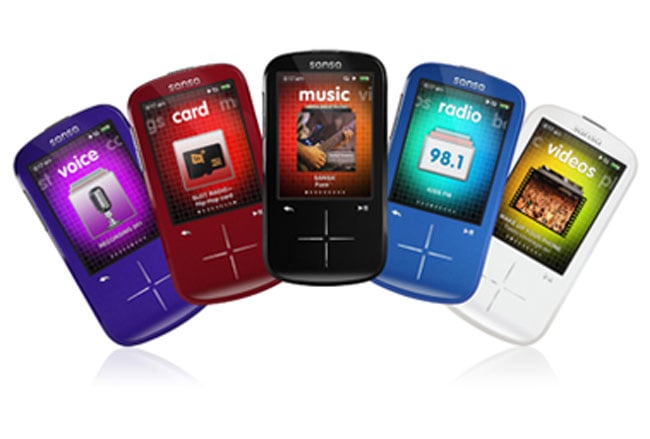 The Sansa Fuze+ Mp3 player is now available from SanDisk.

SANDISK INTRODUCES THE SANSA FUZE+ MP3 PLAYER—OFFERING A BEST-IN-CLASS COMBINATION OF FEATURES, EASE OF USE AND VALUE

Milpitas, Calif., August 31, 2010—SanDisk Corporation (NASDAQ: SNDK), the global leader in flash memory cards, today announced that it has set a new standard for sub-$100 portable media players. The Sansa® Fuze™+ (plus) MP3 player is available now, delivering a best-in-class combination of features, ease of use and value.

The Sansa Fuze+ portable media player, successor to the popular Sansa Fuze MP3 player, offers consumers the quality and flexibility they demand at a price that’s hard to beat. The completely redesigned media player delivers a hassle-free and satisfying user experience that enables unparalleled freedom in how consumers access their favorite digital content. Music and video lovers can expand the player’s storage capacity according to their needs, quickly navigate their libraries of files and enjoy high-quality audio and video playback.

“The Sansa Fuze+ is the most versatile portable media player available for under $100,” said Tom Bailey, senior director, AV retail, SanDisk. “We developed an entirely new product to provide consumers with a stylish, affordable device that performs exactly as a sophisticated yet easy to use player should.”

Feature-rich Form Factor
The Sansa Fuze+ portable media player offers sleek and thin styling that fits comfortably in the palm of a hand, and its new capacitive touchpad provides the sensation of using a touch-screen without obscuring the device’s viewable area. The player’s bright, colorful and large 2.4” QVGA LCD screen produces sharp, vibrant images when viewing videos or photos.

Consumer-friendly “Film Strip” GUI
The player’s unique GUI operates like a film strip, enabling intuitive screen navigation that creates a more natural, crisp and satisfying user experience. Left to right finger sweeps select functions such as Music, Video, Podcasts, FM Radio and Photos, while up and down sweeps or double taps on the touch-pad let users explore and select individual categories and files.

The Sansa Fuze+ portable media player is compatible with Windows, Mac OS and Linux operating systems. The media player is also preconfigured for seamless synchronization with Rhapsody, eMusic and Napster.

microSDHC Card Slot
The Sansa Fuze+ portable media player is fully compatible with SanDisk slotRadio™ cards or any microSD™ card loaded with music, photos or videos**. Consumers can slide these cards into the player’s microSDHC™ memory card slot to instantly expand their music, photo or video libraries without consuming any onboard storage.

•    SanDisk slotRadio cards give consumers immediate access to some of their favorite styles of music, including Rock, Country, Oldies, Classical and Hip Hop/R&B. Most slotRadio cards contain 1,000 songs**** featuring top artists from the Billboard® charts, and are available for only $39.99.

Additional Features
The Sansa Fuze+ media player’s rechargeable battery lasts up to 24 hours of audio playback or up to five hours of video playback2. For enhanced versatility, the device also includes a recordable FM radio, gapless playback and a microphone for audio capture.

Pricing and Availability
The Sansa Fuze+ is available in red, white, black, blue and purple. The player is available now at major retailers and at sandisk.com in 4, 8 and 16 gigabyte (GB)*** capacities carrying MSRPs of $79, $89 and $119 respectively, although in-store pricing will be set by retailers.

About SanDisk
SanDisk Corporation is the global leader in flash memory cards – from research, manufacturing and product design to consumer branding and retail distribution. SanDisk’s product portfolio includes flash memory cards for mobile phones, digital cameras and camcorders; digital audio/video players; USB flash drives for consumers and the enterprise; embedded memory for mobile devices; and solid state drives for computers. SanDisk is a Silicon Valley-based S&P 500 company, with more than half its sales outside the United States.