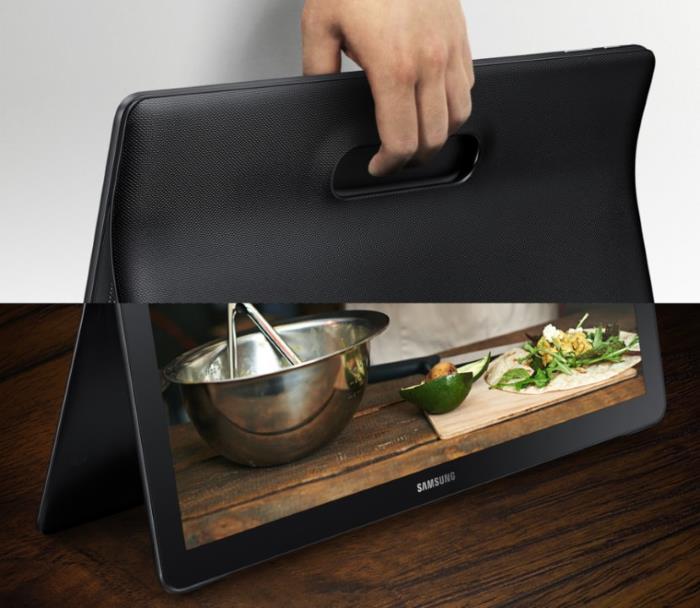 Samsung’s gigantic new 18.4-inch tablet has seen its fair share of leaks and rumors over the past few weeks. We’ve seen images and leaked renders of the tablet but it seems the wait is now over.

Samsung has officially unveiled the over-sized Galaxy View, which is quite bigger than the tablets we carry around with ourselves.

“At Samsung, we are committed to creating new possibilities and bringing our consumers the best mobile experience,” said JK Shin, CEO and Head of Samsung’s IT & Mobile Business. “We are very excited to introduce the new Galaxy View, providing an entirely new way of consuming mobile video and entertainment.”

The tablet even boasts a handle as seen in the image above, which can be used to carry it around with ease. As far as the specifications are concerned, there’s a massive 18.4-inch display with a resolution of 1920 by 1080 pixels resolution, and is powered by an octa-core 1.6GHz processor. The tablet measures 275.8 x 451.8 x 11.9mm, and weighs 2.65kg so you do need a handle if you want to carry it around with you for work.

Samsung Galaxy View features 2GB of RAM, 32/64GB of internal storage coupled with a microSD card slot, a 5700 mAh battery, LTE option, and Android 5.1 Lollipop as its operating system out of the box.

Samsung didn’t reveal the complete information about the pricing and availability of the tablet, but previous rumors hints at a $599 price tag, which may sound attractive for a tablet that big. But, do think before you purchase as it may not be the best tablet when it comes to portability. We’ll find out once it hits the market.