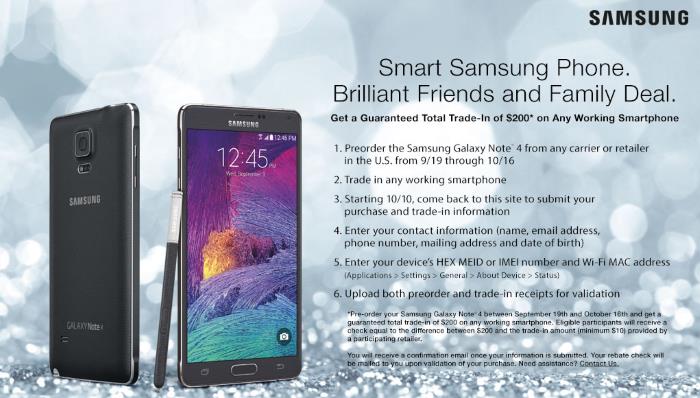 Samsung Galaxy Note 4 is up for pre-orders in the US on AT&T and Verizon for $299.99 on-contract. If you’re thinking about pre-ordering the device, Samsung has a promotion to help you save your hard-earned cash.

From now through October 16th, Samsung will offer users with a total trade-in value of $200 if they exchange their working smartphone for Samsung’s Galaxy Note 4.

It works like this: pre-order the Samsung Galaxy Note 4 by October 16th, and go to any participating retailer to trade-in your existing handset. After the trade-in, just send Samsung the required trade-in information, as well as the pre-order receipts for validation, as well as your personal and device information.

After validation, Samsung will send you the different between the trade-in amount you received and $200. For instance, if you received, let’s say, a $100 for your old smartphone, just send in the documents and relevant details to the Korean company, and they’ll send you a check of $100. It’s that simple.

So, anyone of you planning to make use of the deal? If yes, hurry as the promotion will end on October 16th.