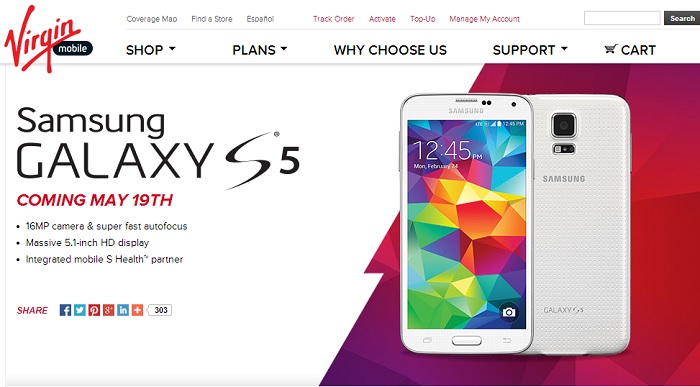 It’s been a while since Samsung Galaxy S5 went on sale on all major US carriers, as well as the retailers across the US. It’s not just the US, the handset is available for sale across the globe since April 11th.

If you’re a Virgin Mobile user, there’s a piece of good news for you. The prepaid carrier mentioned it will launch the Samsung Galaxy S5 on May 19th.

For those of you who can’t recall, the Samsung Galaxy S5 rocks a beautiful 5.1-inch Super AMOLED display sporting a resolution of 1920 x 1080 pixels. The handset is powered by a quad-core Snapdragon 801 chipset clocked at 2.5GHz with Adreno 330 GPU and 2GB of RAM on board.

Other features include 16GB storage with a microSD card slot, 16MP camera for photos and videos, 2MP front-facing camera, a 2,800 mAh battert, fingerprint sensor under the home button and runs Android 4.4.2 KitKat as its operating system.

Samsung is also rumored to be working on a better version of the flagship device dubbed as the Galaxy S5 Prime, which will feature better hardware, including a slightly bigger 5.2-inch display with QHD resolution, faster processor and more RAM. There’s no confirmation from Samsung about it, but its rumored to hit the retail shelves in June. We’ll update you as soon as more information about the purported Samsung Galaxy S5 Prime surfaces.