Samsung unveiled the highly rumored Galaxy S5 yesterday in Barcelona, with the device heading to global markets in April. We all now Samsung, even other manufacturers, add their own customizations and utilities on the devices, which takes up a lot of storage.

Samsung Galaxy S5 is no different, it may have a little less bloatware compared to Galaxy S4, but it still does. And what’s even more surprising is that the latest Samsung Galaxy S5 ROM almost takes up more than half of the internal storage, with almost 7.8GB left for the users to use. 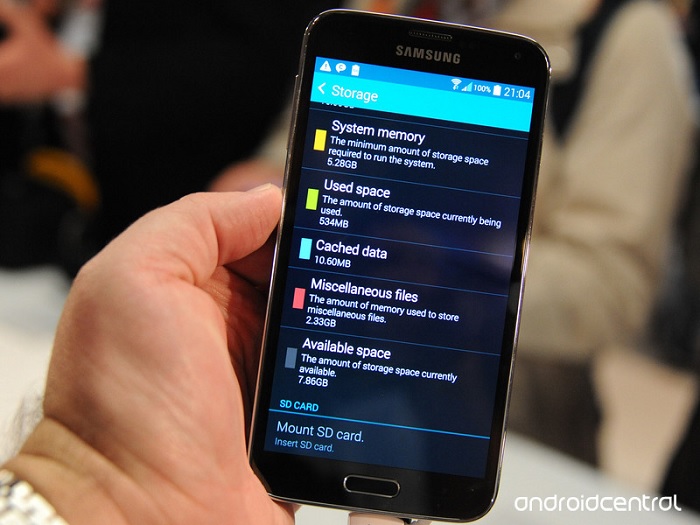 As you can see from the image above, the available space for users available is just 7.86GB, when its turned on for the first time. The OS takes 5.28GB while the miscellaneous files take ups 2.33GB of storage. This should come as a disappointing news for all those users who were planning to get their hands on the 16GB model once it arrives, but there’s a 32GB model available as well and it should come out to be a problem for it.

That’s one of the reasons there’s a microSD card slot, and on the Samsung Galaxy S5, users can use a card of up to 128GB to make sure there is enough storage for the amazing camera and 4K video shooting.

If you ask me, I would prefer the 32GB model over the 16GB (I’m currently using the 16GB S4, and the lack of storage is problematic at times). What do you think?