While Samsung has yet to announce the availability of the Android 4.4 KitKat update for the Samsung Galaxy S4, the flagship device from the Korean OEM last year, we’ve already seen the update hitting Sprint variant last week.

Now, according to a leaked document obtained by the folks at AndroidCentral, the Samsung Galaxy S4 on U.S. Cellular will get the taste of Android 4.4 KitKat on February 19th. 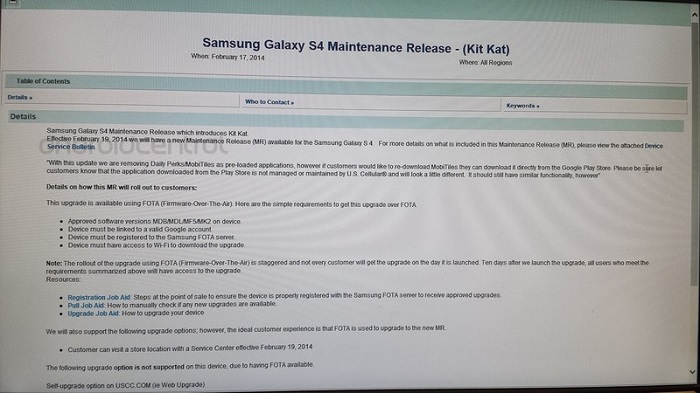 The leaked document mentions it as a maintenance release, which will have a staggered roll out over-the-air, meaning that it’s not necessary everyone will get it on the first day of launch. But, U.S. Cellular says it will take almost ten days for every subscriber to get the chocolaty taste of Android 4.4 KitKat.

Additionally, the Daily Perks and MobiTiles apps will be removed from the operating system, but those of you want to use those apps can download them from the Google Play Store.

To get the update, there are some requirements as well. You have to make sure your device is on the current approved software version and is linked to a Google account, as well as registered to Samsung server. You will not receive the update if you do not meet the requirements.

Let’s hope the date is correct. For those of you in other parts of the world, it should be a good sign that the update is almost ready and should roll out for international variants of the device as well. We’ll update you as soon as it begins.