Earlier this year, Samsung launched the gigantic Galaxy NotePro 12.2 tablet, which reached Verizon last month in the US. However, it seems the tablet might hit AT&T in the coming weeks too.

Recently, Samsung Galaxy NotePro was spotted at the FCC with AT&T LTE bands with a model number SM-P907A. The listing on FCC doesn’t reveal the name specifically, but the the dimensions fits with the Galaxy NotePro, and shows an AT&T logo on the back of the device. 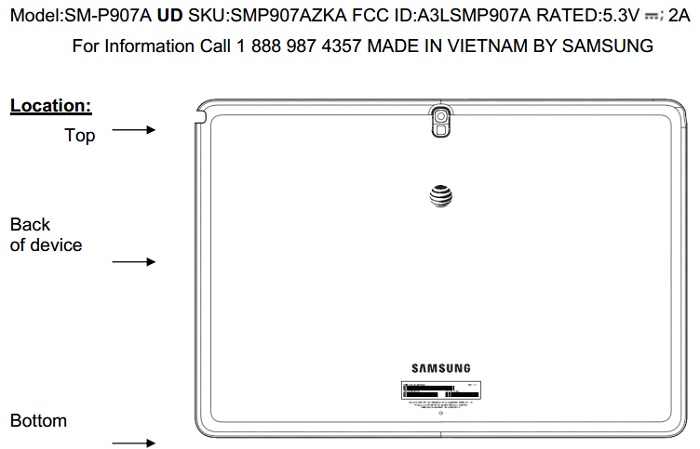 There’s no word about the launch date or pricing of the handset, but keep this thing in mind, it’s not going to be cheap. The WiFi only version of the tablet is available for $699.99, while the Verizon-branded Galaxy NotePro comes with a $749.99 on-contract price. So, there’s a probability that AT&T Samsung Galaxy NotePro will follow a similar pricing strategy.

As far as specifications are concerned, the Samsung Galaxy NotePro comes with a 12.2-inch display sporting a resolution of  2560 x 1600 pixels, a quad-core Snapdragon 800 chipset clocked at 2.3Ghz, 3GB of RAM, 32/64GB of storage with a microSD card slot, 8MP rear camera, 2MP front-facing camera, a 9,500 mAh battery and runs Android 4.4 KitKat as its operating system.

We’ll update you as soon as we get more information about the AT&T powered Samsung Galaxy NotePro.