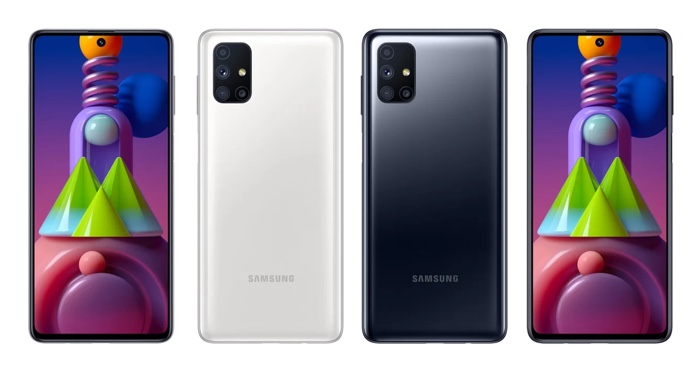 We have been hearing rumors about the new Samsung Galaxy M51 smartphone for some time and now some press renders for the handset have been leaked.

The photos give us some ideas on the handsets design, they confirm the amount of cameras on the device also also their position.

We previously heard that the handset would come with a 6.7 inch display, probably with a Full HD+ resolution and it will be powered by a Qualcomm Snapdragon 765 processor and come with 8GB of RAM.

The device is rumored to feature 64GB of storage and a microSD card slot for extra storage, plus a range of cameras.

On the front of the device there will apparently be an 8 megapixel camera and on the back there will be a quad camera setup. We only know details on two of the four rear cameras, a 64 megapixel sensor for the main camera and a 12 megapixel ultra wide camera, plus two more cameras.

As soon as we get some more information on the new Samsung Galaxy M51, including details on when it will launch, we will let you guys know.

Here’s your first look at the official press renders of Samsung Galaxy M51 in Black & White colors!
Without any watermark so guys please credit if you use or share them 🙂#GalaxyM51 pic.twitter.com/OkqLiRyZcw