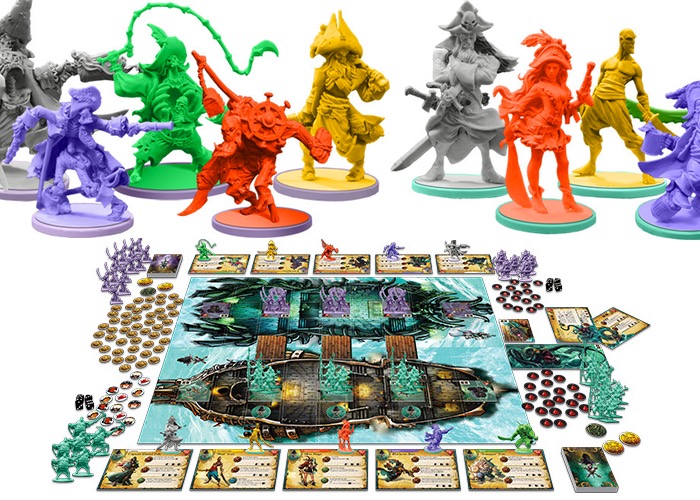 Gamers that enjoy a good board game may be interested in a new pirate game created by CoolMiniOrNot called Rum & Bones. Watch the video below to learn more about the new Rum & Bones board game which is currently run the Kickstarter crowdfunding website and is already blasted past its $50,000 pledge goal with still 24 days to go.

Rum & Bones has been designed to be played by 2 to 6 players and involves two pirate crews engaging in fierce deck battles to control Davy Jones’ treasure. With plenty of miniatures to bring the board game to life including plenty of stretch goals.

“Rum & Bones is a miniatures board game where players control fantastic pirate crews engaged in fierce combat. Inspired by MOBA style video games, Rum & Bones’ gameplay is deep, fast-paced, and highly strategic. The game pits two pirate factions, controlled by 2 to 6 players, whose ships are locked in combat, with each crew attempting to board the enemy ship and disable it.

Each ship’s single-minded crew of Deckhands and Bosuns charge headlong across the gangplanks to attack key deck features on the enemy ship. These lowly crewmen are not directly controlled by the players. They form a constantly-replenishing mob of pirates charging towards the enemy, but the crews are evenly matched, so it’s up to the player-controlled Heroes to shift the tide of battle!

Each faction has five types of Heroes at their disposal: Captain, Quartermaster, Swashbuckler, Gunner and Brute. Each of these roles has its own general place in the battle. However, each Hero is still unique, with their own set of attacks, abilities, and reactions to crush the enemy or give their crew the push they need!”

So if you think Rum & Bones is something you would enjoy playing, visit the Kickstarter website via the link below to make a pledge and help Rum & Bones become a reality with pledges for $100.